When you first play the T28, you will notice that it is much slower then the T25 AT. This tank is a bit faster than the T95, but not by much, so both tanks are easy prey for artillery and fast tanks. The frontal armor is very good for its tier, unlike that of its turreted brother the T28 Prototype, although the lower part of the armor is weaker. The 120mm AT gun can bring down even the strongest opponents with its rapid fire and good damage and accuracy. The only things the driver needs to worry about are its side and rear armor, as they are quite thin, allowing quick movers to take you down with ease. Be patient, stay in cover, and provide support for your allies and the T28 will prepare you greatly for the monster T95.

As such, this tank, unlike the T95 with its extreme frontal armour, cannot really lead a spearhead unless it is top tier. Instead, it should function as a support sniper at mid range, where its small silhouette, large gun mantlet and good accuracy can be an advantage, and the 203mm of armour can start bouncing too.

When at top tier, a fully upgraded T28 can become an surprisingly effective street-brawler if the Driver possesses the Clutch-Braking skill and the tank is equipped with a tank gun rammer. This playstyle can mainly be achieved deep in urban areas where buildings can provide barriers against artillery shells. Try to keep your sides and rear as little exposed to the enemy as possible constantly remain on the move, only stop when attempting mid-range shots and make sure you have team mates close by who can cover you if an enemy manages to slip into your side.

Similarly to the T95, the T28 CAN potentially bounce arty shells, but in the T28s case, only from pesky FV304s, and infrequently, as with the T95.

You may have the Tier X radio from other lines and the 105mm from the T25 AT, but you will need to equip the tracks to be able to mount the 120mm. Then you should research the engine, which is the same one that is in the T95. 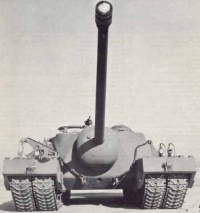 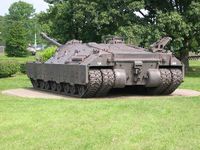