The M48A5 Patton is another example of a jack-of-all-trades-master-of-none tank like its predecessors. It possesses a smooth, egg-shaped hull and a curved turret with decent frontal thickness. Its armor is stronger than most mediums of its tiers and will deflect a surprising amount of shots from its peers if hull down. The 105mm M68 is an extremely versatile weapon, with high penetration, damage, and rate-of-fire. While it is a clear improvement in firepower over the M46 Patton, the M48A5 will face opponents with equal or even superior survivability.

It is also slightly slower than its predecessor, due to its heavier weight and weaker engine. In addition, the M48A5 is also a very large tank, even larger than the T110E5 heavy tank. However, it compensates for that with its reasonable amount of maneuverability and great traverse, at 50 degrees per second. Furthermore, the gun depression is still satisfactory at 9 degrees, though not as effective as the M46 Patton due to its middle turret placement. This makes it suited for close to mid-range combat, darting in and out of cover or a crest, firing shots at the enemy before they can fire back.

-Cupola is still a weak spot though smaller than it was before.
-Armor won’t stand up to gold rounds most of the time.
-Sluggish top speed. Slowest of all tier 10 mediums.
-Mediocre side armor and abysmal rear hull armor.

The M48A5 Patton, together with the M60, currently has the best view range in game and should be played with this in mind. At 420m this can be taken above and beyond the 450m hard cap with Coated Optics, which will help negate enemy camouflage.

However, much of this improvement in protection was negated by its weak commander's cupola. This is a weakspot so the driver must be wary lest it protrude from cover. In fact the size and generally weak armor make the tank a very attractive target for artillery and tanks, therefore be constantly aware and never stay idle too long in the open. With the gun's accuracy on the move, you would not need to stop for too long anyway.

As of patch 9.20, the M48 Patton no longer requires any module research and comes elited. 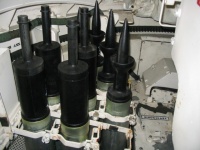