The StuG III is an absolute nightmare to opponents if used correctly. It can be both a close combat unit with the inaccurate, hard hitting 10,5cm, or can be an excellent sniper with the 7,5cm. The 10,5cm can be excellent for taking out lower tiered enemies in one shot. But, it is not useful against higher tiered tanks.

The true strength of the StuG lies in its insane camo and sniping abilities. Therefore, it is highly recommended to use the 7,5cm and to buy a camo net. With the Tank Gun Rammer and the Enhanced Gun Laying Drive along with 100% crew with camo and repair as secondary perks combined with hiding in a bush, this tank is virtually invisible, even when firing. Adding binoculars to further increase sniping ability is recommended. With a fast firing, fast aiming gun and remaining virtually invisible, it can fire at enemies without being detected for a very long time. Sniping from afar, you'll often get many opportunities at the sides and rears of tanks. Coupled with tier 7 tanks or lower and the 7,5cm gun, it can penetrate any tank it faces from a sniping position. 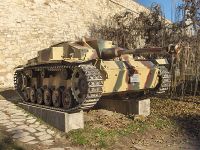 After the Second World War, the Soviet Union donated some of their captured German vehicles to Syria, which continued to use them, along with other war surplus AFVs (like long-barreled Panzer IVs and T-34/85s), during the fifties and up until the The War over Water against Israel in the mid 60s. By the time of the Six Days War, all of them had been either destroyed, stripped for spare parts, or interred on the Golan Heights as static pillboxes.
click to read more...