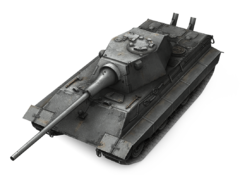 However on the down side, the E50 M's armor profile isn't perfect. The turret and lower front plate are the prominent weak spots. The front of the turret has a high armor value, but barely any slope, meaning most guns it comes across can penetrate it; however, it was buffed in Update 3.1. And as per the norm of German tanks, the lower front is exposed and relatively weak. It can be expected that almost every time, shots will penetrate the lower front unless the enemy is a light tank or firing high explosive ammo. In addition, although the 50 M has very good accuracy, the damage per minute is sadly the worst in its class. Every other tier 10 medium has better DPM which they can use to pump out damage even faster. However, at range where said tanks might miss a lot, the E 50 M still has the upper hand.

Retrieved from "http://wiki.wargaming.net/en/index.php?title=Blitz:E50_Ausf_M&oldid=270716"
Categories:
Your location:
To log in, select the region where your account is registered
CIS Europe North America Asia Republic of Korea
Or use Microsoft Login to enter WoT XBOX ecosystem
Log in