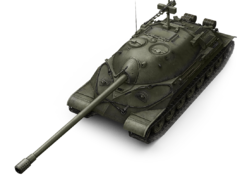 It's not fast and delivers mediocre damage while being hard to kill due to its heavily sloped front armor. The IS-7 has some of the best sloped frontal armor in the game. However this is somewhat nullified at close range by the equally thick but much less sloped lower plate. All these strengths come with a weakness; the IS-7's main gun. While having the same listed accuracy as the E-100's 15cm, in practice it seems to be worse at actually hitting the target, let alone hitting a weakspot, thus requiring the player to get fairly close to their target in order to lessen the impact of its poor dispersion values. This in turn makes you a much easier target to hit as well.

However, these sloping plates also add a disadvantage: You cannot angle the frontal armor of IS-7 as you expose the well-sloped-but-weak armor plate to the enemy, the effective armor when fighting angled drops a fair amount, allowing tier 8, 9, and 10 guns to punch through if they strike at a shallow enough angle to the plate. This in turn makes your lower plate incredibly easy to penetrate as it is just as thin as the upper plate but with far worse sloping. When fighting one at an angle, prefer its flatter front armor sections than is angled side armor, or shoot the sprocket, dealing damage and throwing off the track. If fighting in an urban environment with many street corners that force you to turn to shoot you opponent, it's advised that you bait them into shooting your thick and spaced side armor by side-scraping, then returning fire as they reload. Or if your weak lower hull exposes to enemy fires, try to wiggle or shake it so that it's harder to penetrate. This can even sometime bounces tier X TD's shots.

Only three were built and it was the largest tank ever produced by the USSR. Although it was in many ways an innovative design, it was never accepted for mass production due to its cumbersome size and the very impractical layout of its fighting compartment. The tank housed a crew of five.

It must be noted that the Slostin gun was to be installed as its AA armament.
click to read more...

Retrieved from "http://wiki.wargaming.net/en/index.php?title=Blitz:IS-7&oldid=229511"
Categories:
Your location:
To log in, select the region where your account is registered
CIS Europe North America Asia
Or use Microsoft Login to enter WoT XBOX ecosystem
Log in