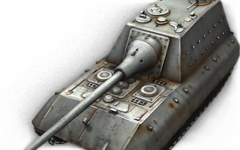 6100000
The E 100 was conceived as the basis for a self-propelled gun, an antiaircraft vehicle, and a tank destroyer. However, development was never started.

The JagdPz E-100 is the tier X German Tank Destroyer. Anyone who has been struck by the massive gun of this tank will tell you steer clear of it, if it happens to find you.

Featuring a massive 170mm cannon that deals an average of 800 damage per shot, the Jagdpanzer E-100 can strike fear into the hearts of even the bravest tankers in world of tanks. The alpha damage of the gun is enough to bring down even tier IX tanks with a few shots. The reload however, isn't that bad, still faster than the KV1s's 122mm. The armor protection of the Jagdpanzer is actually quite good, as the only true weak spot on the front of this monster is the lower armor plate. However, even when the tank is fought at an angle it can be difficult to penetrate. Never underestimate this beast as doing so will cost you roughly half of your tank, if not all of it.

However, the tank is overall degraded by its severe lack of mobility. Abysmal traverse numbers mean that even heavy tanks will be able to flank you. The large profile and horrific camouflage values mean that staying at the back is not an option. It therefore must be used as a breakthrough tank in the front line, but cautiously, since the lower plate is very large and very weak.

The Jagdpanzer E-100 takes another leap of size and lack of mobility. Even slower than the Jagdtiger, this is a TD which should never be left alone, as all it takes is one rather mobile tank to flank you and mercilessly kill you.

Your 17cm gun features a quite good 299mm penetration, and 420 with premium ammo, which should allow you to penetrate most things that cross your path. Be careful not to aim at the middle of the tracks, especially when using HEAT, as the tracks will probably absorb all the damage, essentially wasting your precious shot. Each shot deals on average just a bit over 800 damage. This is quite intimidating, as it's almost half the HP on some tier 9 tanks. This makes you one of the most feared tanks on the battlefield, so use this to your advantage.

Mobility is a big problem for the JagdPz E-100. You have a measly 8.96 hp/t, which gives you mediocre acceleration, and a poor traverse speed as well. Any tank with even decent mobility will be able to outmaneuver you if it finds you alone. You should always try to have someone nearby that can help you.

Luckily this TD has pretty good armour. It may not be T110E3 kind of armour, but it does the job. By this point you should already know how to angle your tank properly to increase your effective armour. Properly angling the JagdPz E-100 will allow to bounce even Tier X premium shells. You want to hide your lower glacis if possible. While not as weak as on the Jagdtiger, it still allows most tanks to easily penetrate you.

Unfortunately your size gives you some disadvantages: first of all, your camouflage is downright horrible, you'll be spotted quite easily. Second, enemies will be able to hit you quite easily from afar, so try not to expose your weak sides.

The Jagdpanzer E-100 suffers quite a bit on random matches, where you may find teams that will leave you on your own, or insist on advancing when you aren't even near a good position for shooting. On Clan Wars or Tank Companies, however, where there's coordination on the entire team, this TD can do quite a good job.

In May 9, 1944, at the meeting of representatives of the companies Krupp and Porsche, Krupp was asked to submit proposals for a super-heavy tank destroyer, mounting either of the 15 cm or 17 cm guns. The first proposal were made that a variant was to be built on Porsche's Maus, with either of the 15 or 17 cm guns mounted on a fixed superstructure. With further discussion, it was said that a variant on the Maus would not be possible due to its height and weight, which would be impossible to transport by rail. The second proposal was made on Adler's E-100. The E-100 proved to be better than the Maus. Porsche, defending its project, the Maus, proposed that anti-aircraft guns would just be mounted on both tanks, but such an assembly would be terribly difficult. Therefore, Porsche decided to offer Krupp the development of a super-heavy tank destroyer on the E-100. Before development could even start, Adolf Hitler ordered that the development on super-heavy tanks were to be discontinued.
click to read more...

Retrieved from "http://wiki.wargaming.net/en/index.php?title=Blitz:JagdPz_E100&oldid=248259"
Categories:
Your location:
To log in, select the region where your account is registered
CIS Europe North America Asia Republic of Korea
Or use Microsoft Login to enter WoT XBOX ecosystem
Log in