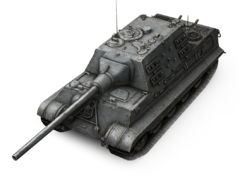 3450000
Developed from 1942 through 1944, the heavy tank destroyer, with the chassis of the Tiger II heavy tank, became the heaviest mass-produced armored vehicle ever. According to various sources, 70–79 tank destroyers were manufactured from 1944 through 1945. The vehicles saw service in the 653rd and 512th Heavy Panzerjäger Battalions.

One of the great icons of historical armored fighting vehicles, this tank is an instantly recognizable symbol on the battlefield. A prototypical showing of the classic tank destroyer formula in WoT, the Jagdtiger combines excellent accuracy, high penetration, and superior damage-per-minute to make it stand out from the masses of heavy and medium tanks swarming all around it. While hobbled by poor mobility caused by armor that's no longer thick enough to be relevant, its ability to paralyze its foes with its 128mm shells at long range allows it to play the sniper role instead. With its firepower, high health, and strong casemate armor this tank is capable of facing down tanks in single combat; when working with others the JagdTiger is the hammer to other players' anvil and allows a team to mow down the enemy in pursuit of victory.

The JT is a one-dimensional tank that uses several facets in pursuit of that. The first and foremost focus of the JT player is one thing: damage. The JT cannot scout and cannot flank other tanks; it's role isn't distraction or spotting or indeed even suppression. It's role is to simply hammer away at the foes' hitpoints, one 128mm shell at a time. Compared to many TDs at these tiers, the JT seems to be a less damaging tank, what with its 490 (later 560) damage-per-shot rating, when many other tier IX (and especially tier X) TDs are doing 750 or more.

The most distinguishing aspect of this tank is its DPM; it can face any other tank in the game and, with adrenaline, literally "burn it down" with its extremely high rate of fire and 460 damage.

However, it is easy to forget that for all the awesome power the 150mm+ class guns have, there is a cost to such damage: long reload cycles. So long, it should be noted, that most large guns don't have any real suppressive power: they take a shot and, regardless of results they are open and vulnerable for enough time for a medium or a group of tanks to push up and ruin their position without any recourse. The JT on the other hand excels at punishing a foe when they make the attempt to push forward. With the shorter reload of the 128mm gun the JT is capable of running sustained fire on targets in the open, and doing so allows it to rake in more damage overall than the single-shot cannons.

There are some drawbacks to the JT though: the mobility and lack of effective armor. Oh, and it has no camo, don't ever think to rely on it. It should be said that the 250mm casemate plate, mantlet, and 8 degrees of gun depression does make the JT quite good when hulldown. However, when attempting to relocate to a location, or in the open without cover, the JT is without question vulnerable. If flanked, the large profile makes it easy to hit. The armor outside of the casemate front doesn't amount to more than 210mm effective, which is less than almost any tier 9 or 10 tank can do anyways. The best way to use the JT is to abuse situational awareness: pay attention to what everyone in front of you is focused on, make sure that you're not the focus of their attention, and then use that time gap to move from cover to cover. Outside of some hills and small rocks, the JT isn't a terribly good tank for abusing cover, but it still can hope to do more damage than it takes even if it gets caught in the open 1-on-1 with its damage-per-minute. The most effective JT either is in the second line sniping what forward spotters see, or immediately in front of an opponent facehugged and overmatching his damage output. The tank is most comfortable at long or zero range; its weaknesses are more apparent in the midrange game where its weakspots are large enough to be targeted accurately and where its often easy to be targeted by more than one enemy at once.

With the standard 128mm L/55 not incapable, the first priority should be mobility. If (RNG save you) you haven't first researched any of the engines on another tank, get those first. After that, prioritize the tracks, and then with the ability to mount it now taken care of research the top cannon.

With the success of the StuG III, Marder I, Marder II, and Marder III in the tank destroyer role, the military leadership of Nazi Germany decided to use the chassis of existing armored fighting vehicles as the basis for self-propelled guns. German tank destroyers of World War II mostly used fixed casemates instead of moveable turrets to significantly reduce the cost, weight, and materials used for mounting large caliber guns.

In early 1942 a request was made by the Army General Staff to mount a 128 mm gun on a self-propelled armored chassis. On 18 May 1942 Adolf Hitler ordered that the 128 mm gun be utilized in the tank destroyer role, rather than for infantry support. Firing tests of the 128 mm gun showed to have a high percentage of hits; lower caliber heavy shells such as the 88 mm and 105 mm were also tested.

By early 1943 a decision was made to install a 128 mm gun on a Panther or Tiger I chassis as a heavy assault gun. The Panther chassis was considered unsuitable after a wooden mockup of the design was constructed. On 20 October 1943 another wooden mockup was constructed on a Tiger II chassis, and presented to Hitler in East Prussia. Two prototypes were produced; a version with the eight road wheel Porsche suspension system (number 305001) and a version with the Henschel nine overlapping wheel suspension system (number 305002), as used on the production Tiger II. They were completed in February 1944. It was originally designated as Jagdpanzer VI, but was later named the Jagdtiger. It received the inventory ordnance number Sd.Kfz. 186.
click to read more...

Retrieved from "http://wiki.wargaming.net/en/index.php?title=Blitz:JagdTiger&oldid=244924"
Categories:
Your location:
To log in, select the region where your account is registered
CIS Europe North America Asia Republic of Korea
Or use Microsoft Login to enter WoT XBOX ecosystem
Log in