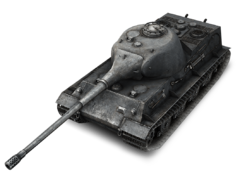 7500
Development of this 70-ton super-heavy tank started on November 1, 1941. In February 1942, the Krupp company suggested the VK 70.01 avant project, later designated the Löwe ("Lion"). Several designs varying in configuration, armament, and armor, were drafted. However, the project was canceled after the Führer made the decision to develop even heavier tanks. No prototypes were ever built.

Designed for sniping, the Löwe is armed with the very accurate 10.5 cm KwK46 L/70 and paired with a rather decent hull. While not quite as heavily armored as the Pz.Kpfw. Tiger II, the tank's armor is sufficient to protect it from Tier 7 guns. The turret, however, is heavily sloped, allowing it to bounce even higher-tier guns on occasion. The performance of this tank is quite good for its tier, provided that it does not engage in close-quarters combat, which is almost certain death. It has poor acceleration, so any reversal in direction will take some time. As a premium tank, the Löwe produces a significantly higher credit income than a typical tier 8 tank. The Löwe was added in the 0.6.4. patch, along with the KV-5 heavy tank.

"The Lion" is primarily a support tank. Do not use it to lead an attack. It will perform better when fighting from the rear of an attack group, from ambush, or from long range. It shoots accurately, and quickly. The Löwe suffers from classic German disadvantages: a tendency to easily suffer damage to the engine, and (often as a result) to light on fire. With a top speed of only 35 km/h, you might want to consider using high-octane Gasoline. Despite this, the Löwe is very maneuverable, or at least it is when on firm ground.

The Löwe has earned a perhaps undeserved reputation for being piloted by bad players, due to new players buying it without proper previous experience in driving a heavy. Make no mistake — on the whole, the Löwe is an awesome weapon. However, it is quite difficult for it to fulfill its potential. Its armor is quite thin for a heavy tank and often even mediums or lower-tier heavies will be able to penetrate it. It is strongly advised that you get some experience piloting a Pz.Kpfw. VI Tiger before attempting to master the Löwe. Adding equipment will improve this tank's performance considerably.

The development of super heavy tank started as early as 1941, when Krupp started the studies of super-heavy Soviet tanks. In November of 1941, it was specified that the new heavy tank was to have 140mm front and 100mm thick side armor. The vehicle was to be operated by 5 men crew - 3 in the turret and 2 in the hull. This new panzer was to have maximum speed of some 44km/h being powered by 1000hp Daimler-Benz marine engine used in Schnellboot (torpedo boat). The main armament was to be mounted in the turret. The weight was to be up to 90 tons.

In the early months of 1942, Krupp was ordered to start the process of designing new heavy tank designated PzKpfw VII Lowe (VK7201). Its design was based on previous project by Krupp designated VK7001 (Tiger-Maus) and created in competition with Porsche's designs (including first Maus designs). VK7001 was to be armed with either 150mm Kanone L/37 (or L/40) or 105mm KwK L/70 gun. Lowe was to utilize Tiger II's components in order to simplify the production and service.

From February to May of 1942, six different designs were considered, all based on the requirements for Lowe. On March 5/6th of 1942, order for heavier tank was placed and project Lowe was stopped in July of 1942. Lowe project never reached the prototype stage but it paved the way for its successor's development - Porsche's Maus.
click to read more...

Retrieved from "http://wiki.wargaming.net/en/index.php?title=Blitz:Lowe&oldid=234060"
Categories:
Your location:
To log in, select the region where your account is registered
CIS Europe North America Asia Republic of Korea
Or use Microsoft Login to enter WoT XBOX ecosystem
Log in