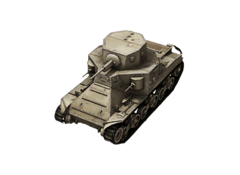 31000
The only medium tank to be adopted by the US Army during the interwar period. The vehicle was equipped with a 37 mm gun and six 7.62 mm machineguns, four of which were mounted on rotating fire units. The two non-rotating machineguns were placed on the front of the hull. Despite unimpressive combat characteristics, the M2A1 became a milestone for American tank development from the time of its inception by virtue of being easily adaptable for mass production. In 1940, 94 vehicles were produced.

It has the improved 37mm and a very powerful 75mm howitzer, which requires the M2M7 turret. At first, with the 37mm, the M2 can feel a bit handicapped fire-power wise. Once armed with the 75mm howitzer, it is a force to be reckoned with. This, coupled with its good mobility, makes the M2 a fun tank to play and the grind to M3 Lee should be quick and painless.

Firepower wise when equipped with the 75mm howitzer, the M2 Medium tank shines. It can one shot or heavily damage most tanks its tier and below, and have some capability of fighting higher tier tanks frontally (Although flanking is always the best choice.) The 75mm HEAT shell has enough penetration to hurt most tier 5 vehicles with good aim. The M-6 37mm gun does offer upgraded penetration, accuracy, and rate of fire, but at Tier 3 these traits are negated by the rather low damage per shot versus the raw damage the 75mm gun offers.

The gun depression is extremely excellent, allowing the M2 MT to take up very effective hull-down positions, which is extremely important. In a tier 3 match this will allow you to bounce most small caliber fire.

Armor wise, it has decent frontal armor, but with the second turret being an open top, it becomes very vulnerable to enemy arty and HE (most notably, enemy M2 MT's), so avoid slugging fights where possible and try to end them quickly with the 75mm gun, or your low reload speed may put you in a situation where you will be outgunned quickly by faster firing enemies or their artillery support. Also be aware that the MG ports are large weakspots.

One interesting thing to note is that this tank is the poster child for the Relaying skill. It has the highest signal range for tier 3, excellent view range, and it has two Radio Operators. Tier 3 is low enough that your team can genuinely benefit from Relaying skill. However, since this is still a medium tank, it is not well suited for actively scouting behind enemy lines. Instead, stay back a bit and let the Relaying skill passively boost the signal range of everyone around you. Also of note is that with Binocs, you can have the maximum allowable view range at tier 3. This can be quite powerful on maps like Province and Malinovka, and allows you to passive scout even in a tier 5 match.

The Medium Tank M2 was a United States Army tank that was first produced in 1939 by the Rock Island Arsenal, just prior to the commencement of the war in Europe. Production was 18 M2 tanks, and 94 slightly improved M2A1 tanks, for a total figure of 112.

The M2's unique features included an unusually large number of machine guns, bullet deflector plates, and sloped armor on the hull front (glacis plate). The main armament was a 37 mm gun, with 32 mm armor. The M2A1 had a 51 mm gun mantlet. For combat it was a poor design, with thin armor, inadequate main armament and a high profile. The four sponson-mounted machine guns proved to be completely unnecessary.

The M2 was already obsolete when it entered service. It compared poorly with the latest European tanks, such as the French S-35, German Panzer III and Soviet BT-7, which could easily withstand 37 mm hits.

The 37 mm main armament of the M2 was equivalent to the 37 mm in the Panzer III, but the BT-7 (45 mm) and the S-35 (47 mm) had more powerful guns. By 1941, Germany had upgunned the Panzer III with a 50 mm L/42 gun, and the Soviets had fielded the vastly superior T-34, with a 76 mm gun and a sloped 52 mm glacis plate. Given this, the M2 was essentially a stopgap measure until more capable tanks like the M3 Lee and M4 Sherman came along in 1942-43. Although 18 M2s and 94 M2A1s were produced, the Ordnance office recommended in 1942 that they should only be used for training purposes, and they were never sent overseas to combat areas.
click to read more...

Retrieved from "http://wiki.wargaming.net/en/index.php?title=Blitz:M2_med&oldid=219504"
Categories:
Your location:
To log in, select the region where your account is registered
CIS Europe North America Asia Republic of Korea
Or use Microsoft Login to enter WoT XBOX ecosystem
Log in