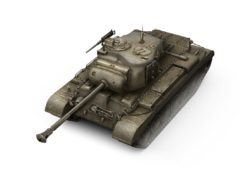 It is the evolution of the M26 Pershing. The Patton is slower compared to its tier 9 medium tank counterparts, but its maneuverability and powerful 105mm T5E1M2 gun make this tank a pretty hard target to kill. Even though this tank doesn't have enough armor to take direct hits without damage, its frontal turret position and quick acceleration, combined with its low gun dispersion, allow it to be one of the true masters of creating protection though exploiting the surroundings. By effectively determining when to take on targets or shots of opportunity while focusing on best supporting the team as a whole through the Patton's strengths, the determined player is a positive force on the team's odds of success. Compared to its tier 9 medium tank counterparts, the Patton is an exploiter and force multiplier, able to effectively boost the sight-lines of other tanks and deliver critical punishment at key times.

In many ways the M46 Patton is basically a M26 Pershing with a much better gun and slightly better mobility. Just like the Pershing, it could excel as a flanker, support, sniper (not as good sniper as the Pershing because of the mediocre accuracy on the 105) and brawler. Use your superior reload time to shoot heavier tanks (like E-75 or IS-8) twice while only taking one shot yourself. Use your higher alpha to outgun opponents such as the T-54 with a lower alpha. Use your depression and come out of a hill, aim, take a shot, and back off to reload. Just don't expect to lead charges in this tank, because people tend to shoot the Patton first since they know how thin the armor on the Patton is.

Just like the M26 Pershing, the Patton 46 can passive scout, except even better. With 410m view range (2nd highest in-game) and increased mobility, the Patton 46 can even scout aggressively. Of course one should only put this plan to action once most enemies have been knocked out. In addition, this tactic is not viable if you are the top tier and only a few allied tanks remain. Unfortunately, because of the 500m view range limit, Coated Optics are more useful, as you will get more out of your exceptionally good view range.

The limited use of the M26 Pershing at the end of World War II led US forces to believe they had the basis for a successful tank design. However, the tank did not meet the requirements laid forth by the Ground Forces Equipment Review Board in 1945. The key complaint with the Pershing, was that it was underpowered. The M26 used the same drive train as the M4 series. With the increased weight of the Pershing, it was an inevitable conclusion that a new power plant was needed.

A new engine, the Continental Motors AV-1790-1 V-form, 12-cylinder, water-cooled, gasoline engine was combined with a newly designed General Motors CD-850-1 cross-drive transmission. This power plant provided 740 hp, a somewhat limited increase in power. The novel design of this unit was it acted as a transmission, braking system, and steering system all in one unit. In addition to this modification, a bore evacuator was added to the M3A1 90mm tank gun, along with a single baffle muzzle brake. Certain other changes were made, including an M83 telescopic fire control system, and round transmission access covers.

In essence, the Patton was basically a modernized Pershing. Originally designated the M26E2, the tank was accepted into service as the Medium Tank M46. It was given the nickname "Patton" in honor of the great World War II general George S. Patton, Jr.

With the outbreak of the Korean War, the tank was rushed into action alongside its M26 cousin to combat the North Korean T-34-85s.

Retrieved from "http://wiki.wargaming.net/en/index.php?title=Blitz:M46_Patton&oldid=217953"
Categories:
Your location:
To log in, select the region where your account is registered
CIS Europe North America Asia
Or use Microsoft Login to enter WoT XBOX ecosystem
Log in