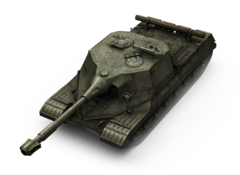 6100000
Development of the Object 268 was started in the summer of 1952 at the Kirov Plant, Leningrad, under the supervision of Joseph Kotin. The vehicle was developed on the basis of the T-10 heavy tank. A prototype was manufactured in 1956. The vehicle passed trials, but never saw mass production.

The Object 268 is a Soviet tier 10 tank destroyer.

The final advancement of its tank destroyer line, the Object 268 features good mobility, effective camouflage, and very well-sloped frontal armor which makes it tricky to attack from the front. Its most notable feature, however, is its upgraded 152mm cannon, which boasts extreme penetration, good alpha damage, a decent rate of fire, and, unlike the BL-10 before it, is decently accurate. This gives the 268 excellent damage per minute, and it is without a doubt a very capable tier 10 tank destroyer.

The Object 268 marks the end of its Soviet tank destroyer line.

The Obj 268 is the quintessential tank destroyer at tier X. Excellent penetration values, solid concealment values, and good mobility all work in its favor. The Obj 268 can reach advantageous sniping positions quickly, and becomes difficult to detect while at range allowing the 152mm gun to continuously crank out damage, with its solid damage per minute numbers, and solid damage per shot. Excellent penetration also allows the Obj 268 to slice through most targets nearly anywhere.

However, the Obj 268 is not without weaknesses. Poor armor and gun arc are among them. When spotted, the Obj 268's armor will only be enough to resist HE shells, and the standard rounds of most opponents will generally be enough to slice through the 187mm superstructure, which is also fairly poorly sloped, but the pike nose shape may allow the Obj 268 to troll a bounce or few. This is not to be relied on though. In addition, the Obj 268 has poor gun arc and gun depression, severely limiting its tactical flexibility, and Obj 268 drivers will find that they have to constantly move the hull and reposition to be able to get a shot off.

No research required. Vehicle is elite in stock configuration

Object 268 during tests at the Kirov plant
Development of the Object 268 was started in the summer of 1952 at the Kirov Plant, Leningrad, under the supervision of Joseph Kotin. The vehicle was developed on the basis of the T-10 heavy tank. A prototype was manufactured in 1956. The vehicle passed trials, but never saw mass production.
click to read more...

Retrieved from "http://wiki.wargaming.net/en/index.php?title=Blitz:Object268&oldid=270453"
Categories:
Your location:
To log in, select the region where your account is registered
CIS Europe North America Asia Republic of Korea
Or use Microsoft Login to enter WoT XBOX ecosystem
Log in