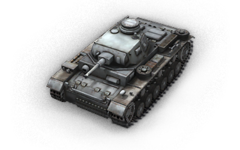 The Pz.III is a decent tank, with good front armor, great speed, and a decent gun. Its front armor and speed lets it go to the front lines, or you can flank thanks to the quick-firing gun. Sniping is a viable option, but you will be needed more on the front lines. That said, the Pz.III is not good at any one thing. The soft lower plate lets enemies destroy your engine and do damage to you. Your gun has bad penetration; for example, you can't penetrate the KV-1's butt without APCR. And your speed rarely, if ever, reaches top speed. Therefore, like many German tanks above it, angle your armour as you peek from cover and you can be alive much longer.

Retrieved from "http://wiki.wargaming.net/en/index.php?title=Blitz:PzIII&oldid=227883"
Categories:
Your location:
To log in, select the region where your account is registered
CIS Europe North America Asia
Or use Microsoft Login to enter WoT XBOX ecosystem
Log in