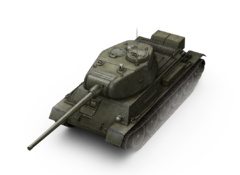 1355000
Designed as a replacement for the T-34 in the spring of 1942. The T-43 was recommended for service, but all work on the project was discontinued in favor of improving the T-34. The vehicle never entered mass production.

Designed to replace the T-34, and actually historically predating the T-34-85, the T-43 features increased hull armor and a new torsion bar suspension replacing the T-34's Christie suspension, but retains the same weapons as the T-34-85, and the same engine and has similar turret protection. As a Tier 7 medium tank, the T-43 is expected to face Tier 8 tanks using the same gun as the tier 6 T-34-85.

Armament-wise, the T-43 retains the same guns as the T-34-85, but most disappointing is that the T-43 cannot mount the top gun, the 85 mm D5T-85BM, right from the start. Though once mounted, it has a higher rate-of-fire on the T-43 than on the T-34-85. It has good damage-per-minute for a Tier 7 medium tank gun, inferior only to the Comet's OQF 77 mm Gun. Like the Comet, however, this is countered by the gun's fairly low penetration, which means that outside of Tier 7 matches the T-43 will have trouble penetrating nearly all tanks from the front, and many from the sides.

Mobility-wise, the T-43 is fairly decent, but unremarkable. Being heavier than the T-34-85 while using the same engine, it has a lower power-to-weight ratio, but better terrain resistance, and has similar acceleration. Having said that, the top speed is fairly decent, and it will have no problems relocating to other flanks as needed. Maneuverability is quite good, better than the T-34-85, and will allow the T-43 to circle most heavies and TDs with ease.

The T-43 does have better hull armor than the T-34-85, however, its poorly angled and must now face Tier 8 tanks with guns that exceed 200mm of penetration, thus, the armor is not effective in tier 8 games. It is useful against lower tier tanks, and angling will yield some lucky ricochets, but the armor should generally not be relied upon to protect it beyond its well sloped turret. The module layout, combined with the generally more powerful guns that the T-43 faces regularly, means that even if it can survive the hits, it risks being crippled with modules or crew members knocked out.

With all this in mind, the T-43 generally performs best as a flanking medium. It simply does not have the penetration and accuracy of the Pz.Kpfw. V Panther to perform as a sniper, nor does it have the armor or agility to engage in close combat with enemy tanks without taking heavy damage and/or crippled modules. Picking your targets wisely should be a primary goal. As the tank's great DPM, great alpha (for a DPM oriented cannon), strong turret armor and sloped armor can give weaker tanks a tough time. Exploiting weaker enemies will also allow your team to take on tougher targets.

Specific mention should be made about the T-43's fuel tank, which is placed right next to the driver to his left. Hits to the front can damage the fuel tank, and if destroyed, the fuel tank will cause the T-43 to catch fire. It is very important to be mindful of this. There is also an ammo rack on the hull floor and on the rear right side of the second turret.

In 1942 the Soviet intelligence had information of the new German tanks Panther V and Tiger VI, and this resulted in a need of a new Russian tank to even the score in fire power and protection. At first it was planned to up-armour the T34 m/43, but instead a larger turret was put to the same chassis that was altered inside.

Two prototypes were built, known as T43 and they had a commander's cupola on top. At the beginning of 1943 they were tested and turned out to be just a little better in combat than T34. The decision was taken to start production, but after the battle of Kursk a few months later the it was obvious that a brand new heavy tank model was needed instead (it was to be IS-1) and thus the T43 project came to a close.

By the middle of the war it had become clear that the Red Army needed a new medium tank. The military demanded a tank with both maximum protection and minimum weight. These demands were implemented and the new medium tank project was completed by June 1943 under the name of T-43.

The T-43 had a configuration like the T-34 Medium Tank; its glacis consisted of 75 mm of armor and its turret-front was 90 mm. The tank w�;D rmed with the 76.2 mm F-34 Tank Gun. However, the total length of the engine and transmission compartment was not reduced; therefore, the battle compartment remained very cramped. To increase internal space, Soviet designers applied a torsion bar suspension that was more compact then the original Christie «candle» suspension. It was the first time that a torsion bar suspension was used for medium tanks.

Beginning in March 1943, two T-43 prototypes (preceded by vehicle T-43-1, which was built at the end of 1942. It possessed a driver's vision hatch and had the commander's cupola displaced to the rear of the turret.) underwent trials. These included combat trials with the NKSM Independent Tank Company. These showed that the T-43, because of its increased 34.1 ton weight, was marginally inferior to the T-34 in its ability to maneuver (maximum speed was decreased to 48 km/h). It did, however, significantly surpass the latter in smoothness of ride. The replacement of the eight side fuel tanks (on the T-34) for a smaller capacity fuel tank in the bow resulted in almost a 100km decrease in the radius of action. Tank crews praised the crew compartment and greater ease in operating the armament. After trials, the T-43 tank was recommended for acceptance by the Red Army at the end of the summer of 1943, but the results of the Battle of Kursk significantly altered this plan.

The armor protection was superior, compared to the T-34, while its armament was similar to the KV-1S Heavy Tank. However, the T-43 had a ground pressure similar to heavy tanks that adversely affected its range and maneuverability. Even worse was its extreme construction: it didn't allow further modernization. As a result, when production T-34's were rearmed with the 85 mm gun, the T-43 became obsolete. However, experience with the T-43 was not lost. The T-43's tests (3,000 km race) had clearly proved the superiority of the torsion bar suspension over the Christie's.
click to read more...

Retrieved from "http://wiki.wargaming.net/en/index.php?title=Blitz:T-43&oldid=234240"
Categories:
Your location:
To log in, select the region where your account is registered
CIS Europe North America Asia Republic of Korea
Or use Microsoft Login to enter WoT XBOX ecosystem
Log in