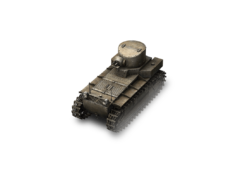 0
The experimental T1E1 light tank designed by the Cunningham company was a further development of the T1 tank. By April 1928, four vehicles were produced. After the vehicle underwent trials in November 1928, a decision was made to enhance the armor, which led to creating the subsequent modification designated the T1E2.

The first American tank available to the player, the T1 Cunningham is popular with many players for its "bug-eyed" appearance. It has the second-weakest tier I armor; however, it has the best top speed of any tier I. Although it does not excel at bouncing shots, its high rate of fire guns are forces to be reckoned with for its tier.

This tank is considerably faster than the other tier 1 vehicles, making it a good offensive tank in early battles. Fully upgraded, it is a nimble but fragile tank, so staying mobile and doing hit and run attacks is essential. Other than its speed, something unique to this tank at this tier are the semi-automatic guns. These guns have 5 round magazines and function the same way as the French autoloaders. They can fire five rounds in quick succession, but then have a long reload time to load another five rounds into the magazine. Remember, every tank the T1 Cunningham encounters will have more armor, so try to avoid slugging matches.

With its speed, it can get into auto-cannon range more easily than the other tier 1 tanks, but the problem is often staying alive long enough to kill the target at that range. Also, the reload time for the auto-cannon on this tank is absurdly long (more than twice as long as any other tier 1 tank), giving it a distinct disadvantage.

Please note the Map Restrictions for tier 1 tanks if you consider purchasing a camouflage skin/paint job for this tank.

The T1 Cunningham was a US light tank design that never left the prototype stages. Officially carrying the designations of T1E2 and T1E4, it continued through the development stages from 1922 through 1928. This tank was never mass produced, nor was it ever fielded. It is unknown how many were actually produced in the prototype stages, but there is at least one known to have been created, currently at the Aberdeen Proving Ground in Maryland, USA.
click to read more...

Retrieved from "http://wiki.wargaming.net/en/index.php?title=Blitz:T1_Cunningham&oldid=230437"
Categories:
Your location:
To log in, select the region where your account is registered
CIS Europe North America Asia Republic of Korea
Or use Microsoft Login to enter WoT XBOX ecosystem
Log in