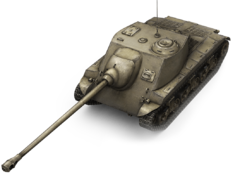 When stock, the 90 mm AT Gun M3 is adequate for its tier and the speed is able to get you where you need to go in short time. When fully upgraded, the T25 AT is a fantastic tank destroyer to play, being very fast, and armed with the 105 mm AT Gun T5E1, it can provide fire support wherever needed. The T25 AT's armor is quite lacking, but the mantlet is not small and can bounce higher tier shells . Because of its lack of armor and hitpoints, it is recommended that you avoid direct firefights with higher tier tanks. One thing that is impressive on this tank destroyer is its deep gun depression, which can come in handy in certain situations.

The T25AT is a tank that can do several jobs decently well, but is not truly a master of any.

In one respect, the tank is great for locating to an excellent spot in which is can provide sniper support, as it's 105mm has both good accuracy and penetration (though aiming for the sides of tanks is still highly recommended). But with tanks such as the Hellcat in similar MM, those spots may get taken before you get there, forcing you to move on to possibly less-then optimal locations.

In one respect, the tank is a good urban brawler and flank tank. It's speed and acceleration, combined with its high maneuverability allow it to quickly relocate behind the enemy to attack when their attention is drawn to the heavies and mediums in front of them. Again, though it maybe good at this, other lighter tanks, especially with turrets are better in this respect as they don't need to traverse the entire corner to shoot, thus reducing the opening the enemy has to fire.

In one respect, due to it's very nice gun depression, the tank makes an excellent hill shooter. On maps defined by their hilly terrain that can be driven up and shot over, the T25AT thanks in part to it's powerful engine, has no problem climbing these hills to quickly pop over and shoot with it's gun aimed full down. Once more, while the tank does well in this regard, it unfortunately means exposing itself to enemy fire that if the driver isn't quick enough.

In one respect the tank can be an excellent end game hunter and scout. Whether the enemy team has only its SPGs left, or has a few speedy and pesky lights and mediums, either scooting around or pushing a base cap, the T25AT can hold its own very well in terms of speed as the driver tries to find them and mark their locations known to their team, and with fire power that outshines many mediums and lights at it's tier, can also quickly finish them off. But again, with speedier light tanks and mediums with potentially better armour should a fire fight ensue, there sits the potential for the tank to be out-maneuvered and over run, there are again better choices that can be had.

The T25AT's combination of speed, gun depression, fire power and maneuverability make it a tank that shouldn't be taken lightly by people facing off against one, yet it's lack of armour and turret mean that it's also a tank that can be exposed to great risk and can easily be exploited by those attacking it.

Players must be aware of the tanks limitations so as to play the tank to its fullest -a well played T25AT can easily do upwards of 1100+ damage a match- but at the same time not let the limitations hold them back from fully utilizing its strengths to their advantages. The lack of a turret -usually the biggest complaint lodged against the T25AT- should not deter anyone from picking one up and playing it as the T25AT is one the most rewarding and fun tanks in the game.

PS: After receiving a buff in Update 3.7, the frontal armor thickness was increased tremendously to 120 mm. Combined with the angling, the front will have 160 mm of effective armor, which means same tier light and medium tanks have a 50/50 chance of penetrating (with the exception of the German Panther). When hull-down and utilizing the full 10 degrees of gun depression, the effective armor thickness goes up to nearly 200 mm, meaning all tier 7 tanks (with the exception of a few TDs) have a 50/50 chance of penetrating. Of course, the opponents could easily switch to gold rounds to take you down, so don't rely on the frontal armor too much, even if it is much more reliable now. As a trade off the weight of the tank was increased by 1 ton, which affects the acceleration a little bit, but should be negligible.

Retrieved from "http://wiki.wargaming.net/en/index.php?title=Blitz:T25_AT&oldid=249506"
Categories:
Your location:
To log in, select the region where your account is registered
CIS Europe North America Asia
Or use Microsoft Login to enter WoT XBOX ecosystem
Log in