There are many seasonal events that take place in World of Tanks, from tank soccer to spooky and mysterious Halloween missions there is something for eveyone! The events are very different and allow you to try different game modes that will test your skills against other players or in PvE environments.

This is an event that adds Christmas and New Year charm to the game. As part of these events, you can get many valuable gifts and decorate your garage to your liking.

Ho ho ho! Were you good this year? As for us, you helped us do a great job! So even if you miss someone on the "good" list, you may not care - we have quite a lot of gifts from us under the tree! Get in the holiday mood - the Holiday Operations event will help you do just that.

Challenges can vary greatly, but one thing remains the same - the final reward is worth it!


Challenge events often consist of 2 chapters, with the first being 10 stages completed with XP or by completing challenges with the 10th stage reward being a premium vehicle. The second chapter is completed with said reward vehicle and often rewards a 3D style. Each successive stage in chapter 1 reduces the purchase cost of the reward vehicle by 10%.

Popular challenge reward tanks include the Bat.-Châtillon Bourrasque, SU-130PM, Proggeto 45, and the first tier 9 premium STRV K.
These events usually happen 3 times a year with one in the end of summer, one before the holiday operations, and lastly at the start of spring.

Long ago, Waffenträgers—colossal German Tier X tank destroyers with high-caliber autoloaders—roamed the battlefields of World of Tanks. Some believed they were gone forever, but in fact, a single one remains, and soon it will return with even more power.


Max von Krieger, formerly known as von Hoffman, is the Engineer who left Headquarters some time ago in order to weaponize advanced electromagnetic technology. Headquarters has deemed these activities to be dangerous and intends to stop the Engineer and capture the tech with the help of the players on the Harrier Squad, a special task force.

When Halloween comes, the line between the world of the living and the dead almost disappears. The forces of evil begin to plan again to rule the world, but the brave tankers are ready to resist them!

As a separate event, Halloween had its debut in 2017. 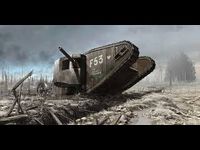 
In Convoy, you will find yourself on September 15, 1916, on the pastures of the Somme, where the world faced the devastating war machines for the first time. This day paved the road to a new world—the world of tanks.

A game mode that is played on a specially modified map specifically for Football Mode. The battle is played in a 3-on-3 format.
Retrieved from "http://wiki.wargaming.net/en/index.php?title=Game_events&oldid=311300"
Category:
Your location:
To log in, select the region where your account is registered
CIS Europe North America Asia Republic of Korea
Or use Microsoft Login to enter WoT XBOX ecosystem
Log in