3900
An armed scout aircraft developed during creation of the light transport aircraft Ao 192 CA. No prototype was built. 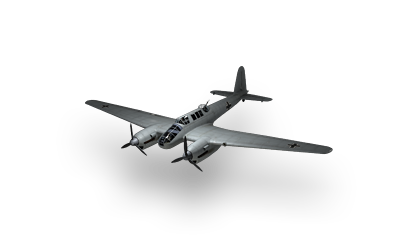 This plane is the first heavy fighter available in the game. It has 185 hit points which compared to everything else, it's a lot. Having all MG's, it is effective at head on attacks but will get shot down in a maneuver based engagement. The tail gunner can deter low health enemies from following you.

The Ago Ao 192 Kurier was a small German twin-engined aircraft designed and built by AGO Flugzeugwerke in the 1930s. A small production run of six aircraft followed three prototypes, these being used as transports.

The first prototype made its maiden flight in mid-1935, soon being followed by a second aircraft, similar to the first. A third prototype, with a deeper fuselage allowing an additional passenger to be carried, more powerful engines and a revised undercarriage, formed the basis for the planned Ao 192B civil transport, with versions planned to serve as light transports, ambulance aircraft and survey aircraft. AGO had large orders for licence-built aircraft for the Luftwaffe however, and only six production aircraft could be built. The six production examples completed were taken over by the State, one registered D-ODAF, being allocated as a personal aircraft to Robert Ley, the Minister of Labour; one was used as a staff transport by the Waffen-SS and registered D-OSSS and another example, registered D-OLER, was used as a staff transport at the Rechlin test centre.

Projected military variants were the Ao 192Ca light reconnaissance aircraft with a crew of two or three, a defensive armament of two fixed forward-firing machine guns and a third gun on a flexible mount in a dorsal position, provision for various cameras and a bomb load of eight 22-26 lb (10-12 kg) bombs and the Ao 192CR light bomber with similar defensive armament to the CA and provision for four 110 lb (50 kg) bombs. Only a wooden Ao192C atrappe was build at AGO-Musterbau.
click to read more...

Germany
Heavy Fighters
ja:Plane:Ao-192
Retrieved from "http://wiki.wargaming.net/en/index.php?title=Plane:Ao-192&oldid=240882"
Categories:
Your location:
To log in, select the region where your account is registered
CIS Europe North America Asia
Or use Microsoft Login to enter WoT XBOX ecosystem
Log in