319000
Modification of the Messerschmitt fighter created after military operations in Spain. Extensively used by the Luftwaffe and the air forces of German allies. 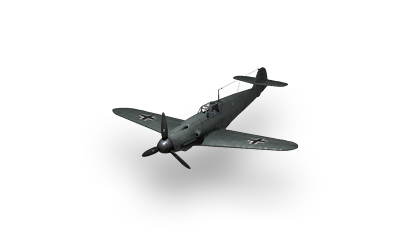 This plane is similar in a lot of ways to the plane before, the 109B. Still has two 7.92s above the engine, still great speed and high altitude but some new things are happening to it. The 7.92s on the wing can be replaced with two 20mm cannons and the nose cannon can be replaced with a 15mm cannon. These improve on the forward firing weaponry and makes it a great contender. It's health is boosted to 200 which is equal to the Spitfire 1 with upgrades. Use your speed to catch up to enemies and then use the extra guns to decimate them. But here's the problem: with all those guns, your speed is affected a lot. You go from having good speed to just average, even with the upgraded engines. But what you lose there, you gain a lot of guns with the ability to maul anything in a head on. Also, you should start to notice that your plane isn't as superior as it was back in tier 4. Russia's many fighters are much better, America has heavy hitters with lots of health and Britain has the legendary spitfire. So don't get too confident

Germany
Fighters
ko:Plane:Bf-109eja:Plane:Bf-109e
Retrieved from "http://wiki.wargaming.net/en/index.php?title=Plane:Bf-109e&oldid=275153"
Categories:
Your location:
To log in, select the region where your account is registered
CIS Europe North America Asia Republic of Korea
Or use Microsoft Login to enter WoT XBOX ecosystem
Log in