Homepage/
World of Warplanes/
Messerschmitt Me 209 A

VIII
0
Engine
Applicability:Messerschmitt Me 209 A 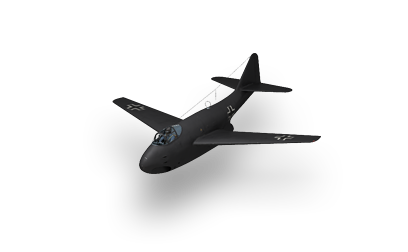 VIII
0
Airframe
Applicability:Messerschmitt Me 209 A

VII
0
Machine gun
Applicability:Messerschmitt Me 209 A

IX
0
Machine gun
Applicability:Messerschmitt Me 209 A

The successor to the Bf 109 and the last of this line German piston-engine fighters, the Me 209 A is a well-rounded and deadly plane. It is incredibly fast and excels in climbing and diving, like its predecessors. Unlike the Bf 109 G, the Me 209 A packs a formidable arsenal of 20mm and 30mm autocannons. Fully-upgraded, you can choose between the rapid-firing MK-108 autocannon or the long range MK-103 autocannon, and turn the Me-209 A into a short-range pursuit fighter or a long-range interceptor. Perhaps the biggest advantage of the Me-209 A is the fact that your top modules are shared with the Ta-152, and upgrading the latter clears out most of the stock grind for the Me-209 A. Unfortunately the Me-209 A carries over some of the traditional weaknesses of the Bf-109 line, such as having average maneuverability and engines prone to damage. A Me-209 A with a sputtering engine is an irresistible target for most planes. Take the lead and fly high, dive in fast, hit hard with your guns, then zoom away. Planes that can't outrun or out-turn you have much to fear.

Germany
Fighters
ja:Plane:Bf-209a1
Retrieved from "http://wiki.wargaming.net/en/index.php?title=Plane:Bf-209a1&oldid=290804"
Categories:
Your location:
To log in, select the region where your account is registered
CIS Europe North America Asia Republic of Korea
Or use Microsoft Login to enter WoT XBOX ecosystem
Log in