952000
Widely used in various roles, including as a long-range fighter, night fighter, and fighter-bomber. A total of 7,781 aircraft of various modifications were built. 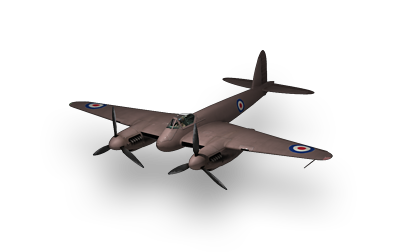 The de Havilland DH.98 Mosquito was a British twin-engine shoulder-winged multi-role combat aircraft. The crew of two, pilot and navigator, sat side by side. It served during and after the Second World War. It was one of few operational front-line aircraft of the era constructed almost entirely of wood and was nicknamed The Wooden Wonder. The Mosquito was also known affectionately as the "Mossie" to its crews. Originally conceived as an unarmed fast bomber, the Mosquito was adapted to roles including low to medium-altitude daytime tactical bomber, high-altitude night bomber, pathfinder, day or night fighter, fighter-bomber, intruder, maritime strike aircraft, and fast photo-reconnaissance aircraft. It was also used by the British Overseas Airways Corporation (BOAC) as a fast transport to carry small high-value cargoes to, and from, neutral countries, through enemy-controlled airspace. A single passenger could ride in the aircraft's bomb bay when it was adapted for the purpose.

When Mosquito production began in 1941, it was one of the fastest operational aircraft in the world. Entering service in autumn 1941, the first Mosquito variant was an unarmed high-speed, high-altitude photo-reconnaissance aircraft. Subsequent versions continued in this role throughout the war. The first Mk. B.IV bomber, serial no. W4064, entered service with No. 105 Squadron on 15 November 1941. From mid-1942 to mid-1943, Mosquito bombers flew high-speed, medium or low-altitude daylight missions against factories, railways and other pinpoint targets in Germany and German-occupied Europe. From June 1943, Mosquito bombers were formed into the Light Night Strike Force and used as pathfinders for RAF Bomber Command heavy-bomber raids. They were also used as "nuisance" bombers, often dropping Blockbuster bombs – 4,000 lb (1,812 kg) "cookies" – in high-altitude, high-speed raids that German night fighters were almost powerless to intercept.

As a night fighter from mid-1942, the Mosquito intercepted Luftwaffe raids on Britain, notably those of Operation Steinbock in 1944. Starting in July 1942, Mosquito night-fighter units raided Luftwaffe airfields. As part of 100 Group, it was flown as a night fighter and as an intruder supporting Bomber Command heavy bombers that reduced losses during 1944 and 1945. As a fighter-bomber in the Second Tactical Air Force, the Mosquito took part in "special raids", such as Operation Jericho an attack on Amiens Prison in early 1944 and in precision attacks against Gestapo or German intelligence and security forces. Second Tactical Air Force Mosquitos supported the British Army during the 1944 Normandy Campaign. From 1943, Mosquitos with RAF Coastal Command attacked Kriegsmarine U-boats (particularly in 1943 in the Bay of Biscay, where significant numbers were sunk or damaged) and intercepted transport ship concentrations.

Heavy Fighters
ko:Plane:D-h-98ja:Plane:D-h-98
Retrieved from "http://wiki.wargaming.net/en/index.php?title=Plane:D-h-98&oldid=285822"
Category:
Your location:
To log in, select the region where your account is registered
CIS Europe North America Asia
Or use Microsoft Login to enter WoT XBOX ecosystem
Log in