336000
The best U.S. carrier-based fighter at the start of the war with Japan. Used from the outset through the end of the war.

The wildcat is not a common plane to see. First American multirole to equip rockets. 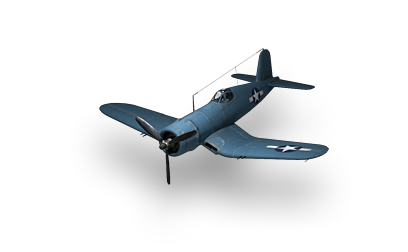 This plane is a rare sight. Not many users. Most opt for the FW 190 because of the auto cannons and speed. So most people don't understand it. It is a huge improvement over the F2A. It has several armaments to choose from for ground attacks. Once you get the airframe, you can get two more 12.7MG's making a grand total of six. To be most successful, use your bombs or rockets on AA batteries or hard targets and then move to planes. This strategy should maximize your value to your team. Just because it does not have autocannons which is a little bummer it has the next best thing if not better depending on your taste. It's maneuverability is another thing that makes this plane better. It can outmaneuver the FW 190, a tier 5 multi role but not the Yak 7, also a multi role. It's also more maneuverable than some other fighters at it's tier like the 109 Emil. That being said, it puts it at an advantage. If used right, this plane can absolutely destroy. Teaming up with allies to shoot planes down and using it's bombs/rockets to level the ground, it's a plane that is underestimated.

Here is a breakdown for strategy:

1. Go for fighters that you can outmaneuver and clip their wings. 2. Go after heavy fighters and attack fighters with a few allies and eliminate them.

This is a good strategy that can be molded to the situation. Versatility is what this plane is made for and it is great at it.

USA
ja:Plane:F4f
Retrieved from "http://wiki.wargaming.net/en/index.php?title=Plane:F4f&oldid=250828"
Categories:
Your location:
To log in, select the region where your account is registered
CIS Europe North America Asia Republic of Korea
Or use Microsoft Login to enter WoT XBOX ecosystem
Log in