907000
One of the most widely produced United States Navy fighters of World War II. Used in both carrier- and land-based operations. 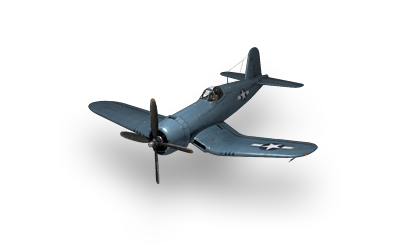 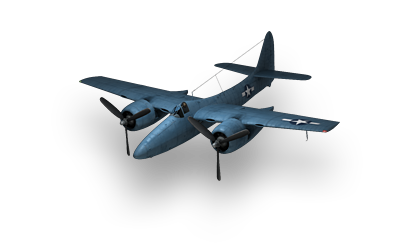 The F4U-1 is the first of the Corsair line and is, in many ways, unique among American planes of its tier. The first thing to note is the appearance of four 20mm autocannons, giving it hard-hitting firepower at medium range. This allows the F4U-1 to compete with other multiroles and fighters and can dispatch GAs and heavy fighters in short order. The F4U-1 is well-rounded with decent maneuverability and airspeed. While not as fast as the P-47B Thunderbolt, it can get around and zoom in fairly quickly. Fortunately the F4U-1 boasts respectable mobility more useful in keeping your autocannons on target rather than evading agile aircraft. It is robust enough to take a few hits, but not quite as tough as its cousin the P-47B. Against ground targets, the F4U-1 can mount eight 5" HVAR rockets or two 500lb bombs. The weapon of choice for most players is the hard-hitting HVAR rockets, useful for pummeling ground targets and destroying the occasional heavy fighter going for a collision kill. The main downsides of the F4U-1, unfortunately, also lie with its armaments. The 20mm autocannnons overheat quickly and the bombs or rockets take a long time to reload. Unlike the P-47B, the F4U-1 isn't suited for sustained fire and requires good trigger discipline. Another downside is the low optimal altitude for an American plane, though this is a small price to pay for its turning and climbing performance. Overall the F4U-1 is better suited at quickly shooting down other planes, with the option of attacking ground targets. In the hands of an experienced player, the F4U-1 is a force to be reckoned with and is more than capable of carrying the team to victory.

Retrieved from "http://wiki.wargaming.net/en/index.php?title=Plane:F4u&oldid=290308"
Category:
Your location:
To log in, select the region where your account is registered
CIS Europe North America Asia Republic of Korea
Or use Microsoft Login to enter WoT XBOX ecosystem
Log in