329000
The Hurricane Mk II entered service in 1940. Compared to the early fighter variants, it was equipped with a more powerful engine, and its armament was gradually enhanced. This modification remained in production until 1944 and was also built in Canada. 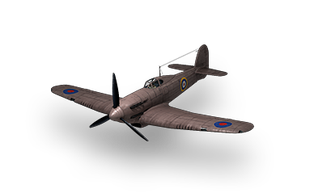 The Mark II Hurricane is a flying grizzly bear: Slow, a little cumbersome, but leaves a nasty mess of anything it can get its claws on. Pilots will have two options for gun armament once fully upgraded: A jaw dropping twelve machine guns, or four hispanos. The hispanos have better range, and deal more damage per shot, while the twelve machine guns take longer to overheat and are better for when the Mark II gets caught in a winding dogfight. The pilot may take their pick. With the Hispanos, pick off anything that gets in front of you as quick as you can, if it is a ground attack craft, the hispanos will maul them if managed properly.

Retrieved from "http://wiki.wargaming.net/en/index.php?title=Plane:Hurricane-ii&oldid=275147"
Category:
Your location:
To log in, select the region where your account is registered
CIS Europe North America Asia Republic of Korea
Or use Microsoft Login to enter WoT XBOX ecosystem
Log in