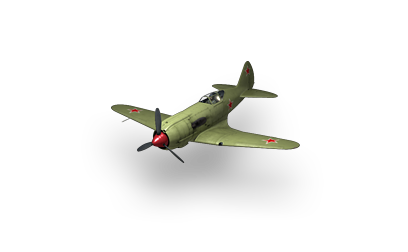 An oddity among the Tier V Soviet fighters and multiroles, the MiG-3 fills out the role of the high-altitude interceptor. On paper it packs good airspeed, good altitude performance, and a full machine gun arsenal. It might appear similar to the American P-40, but there are enough distinctions that will force you to play it differently. The MiG-3 has marginally better maneuverability but worse accuracy at range thanks to the gun layout. Unlike the P-40, the MiG-3 is forced to engage at a closer range to maximize its volume of fire. The MiG-3 is also more fragile and more vulnerable to module damage, so pick your fights well. Like the P-40, the MiG-3 relies on speed and altitude performance to score kills. Fly high, fly fast, stay glued to your target, and most importantly zoom up and away from low altitude dogfighters eager to ruin your day.

USSR
Fighters
ja:Plane:Mig-3
Retrieved from "http://wiki.wargaming.net/en/index.php?title=Plane:Mig-3&oldid=290773"
Categories:
Your location:
To log in, select the region where your account is registered
CIS Europe North America Asia Republic of Korea
Or use Microsoft Login to enter WoT XBOX ecosystem
Log in