1400000
Developed by the Republic Aviation Corporation in 1944 to keep the P-47 competitive with the P-51 Mustang fighter, which was introduced into service with the U.S. Army Air Force. A total of 1,816 P-47Ns were built. 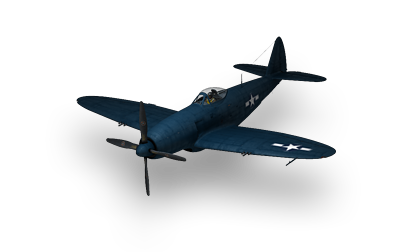 The classic P-47 Thunderbolt, the P-47N carries over the strengths and weaknesses of the previous plane to Tier VII. The P-47N still carries two hard-hitting 500lb bombs from before, but now it can also mount the powerful 5" HVAR Rockets from the F4U-1 Corsair, increasing its effectiveness against ground targets. As before it packs eight 12.7mm machineguns that can rival some autocannons in lethality despite its limited range. The P-47N is still one of the toughest multiroles at Tier VII with a whopping 450 health points and increased resistance to damage, making it no easy prey when backup is available. It still retains the good roll-speed from the P-47B, useful for switching between targets in an attack run. However the P-47N still has familiar problems from the P-47B, such as the poor climb rate and atrocious maneuverability. Your targets are slower or less maneuverable planes like GAs, heavy fighters, or low-flying bombers. Fighters and multiroles at Tier VII will have a field day running you down if you give them a chance. Stay with backup and use your ordnance well; many battles are won by critical capture points secured by a well-placed bomb or rocket strike. Use your guns to pummel GAs or Heavies, while finishing off wounded fighters and multiroles every now and then. Dive in and zoom out always, never try to out-turn planes that have the upper hand. The P-47N is still one of the best and toughest support planes at its tier, and can carry its own weight in all battles.

USA
ja:Plane:P-47n
Retrieved from "http://wiki.wargaming.net/en/index.php?title=Plane:P-47n&oldid=291248"
Categories:
Your location:
To log in, select the region where your account is registered
CIS Europe North America Asia Republic of Korea
Or use Microsoft Login to enter WoT XBOX ecosystem
Log in