887000
An early model of one of the most famous U.S. Army Air Force fighters of World War II. Used mainly in North Africa, Burma, and Great Britain. 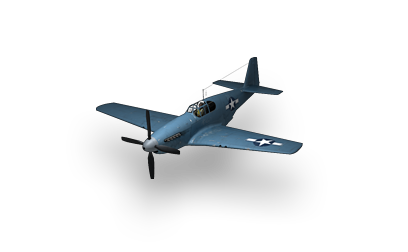 The P 51A Mustang, the first true American fighter available to the player. A great plane for climbing high and executing all the planes that it dives on. Even though there is not much of great note to the P-51A on paper, in practice it can prove a rather flexible machine. It may not be as nimble as a Japanese or British fighter, but it can stay behind them long enough to do a number on them. It may not have the firepower of an La-5 or Yak-9, but the volume of bullets it can throw is not to be underestimated (along with how long it can spray those bullets). Due to its lack of autocannons, it is ill-advised to hunt ground attack craft or bombers with the P-51A unless they are severely damaged. Avoid low altitude fights with more agile planes like the spitfire and zero, and punish heavy fighters that try to make a pass on you with your exceptional speed.

For the history of the later Merlin power versions that serve the USAF: https://wiki.wargaming.net/en/Plane:P-51

For the history of the Lightweight Mustangs: https://wiki.wargaming.net/en/Plane:P-51h

for the service history of all variants of Mustangs in non-USAAF/RAF service:

For the history of the Mustangs that served the RAF:

The Development of the now famous P-51 mustang is a rather intriguing case when studying the early days aircraft development that involve more than one nation, as unlike its counterparts the Grumman F6F Hellcat and the Supermarine Spitfire, the P-51 was a joint venture between the United Kingdom and the USA.

The origins of the P-51 lie on one day in April 1940 when Sir Henry Self who headed a British Purchasing Commission in the USA and was head of the RAF’s Production, Research, and Development branch as well as being a member of the British Air Council Sub-committee on Supply and Sir Wilfrid Freeman who headed the Air Member for Development and Production faced a rather serious problem, they where task with getting an American Fighter aircraft for the RAF to bolster its numbers yet none of the aircraft that was serving under the USAAC (the original name of the USAAF) at the time met the requirements to serve in the RAF with the closest aircraft meeting the requirements being the Curtiss P-40 Tomahawk but the Curtiss-Wright plant was running at capacity, meaning that the P-40 was in short supply. For a while, it seems the task given to Self and Freeman was doom to fail however a solution came from a very unlikely corner. Around this time period, North American Aviation (NAA) was supplying the RAF with the Harvard variant of the T-6 Texan trainer aircraft and its president James H. Kindelberger was looking to sell the B-25 Mitchell medium bomber to the RAF. Approaching Self with the offer expecting him to accept the proposal, instead Slef ask Kindelberger if NAA can produce a license version of the P-40 for the RAF, in response Kindelberger claim that the NAA can make a better aircraft than the P-40 using the same Allison V-1710 engine that the P-40 use and get it in the air in a shorter amount of time than it will take to get the license from Curtiss to make the P-40 and start the production run. Self accepted the offer

Soon after, the Commission began debating on the specification’s of the aircraft that the NAA was to create for the RAF and settle on a aircraft that being armed with four .303 in (7.7 mm) machine guns (as used on the Tomahawk), utilize the Allison V-1710 engine, costing at most $40,000 and be deliver to the RAF by January 1941 and on March 1940 Freeman who at this point was the executive head of the Ministry of Aircraft Production (MAP) with the approval of Self’s commission order 320 aircraft from NAA, and later of September 1940 they will order an additional 300 aircraft

Upon receiving the order from the RAF NAA immediately created the development team task to create the aircraft and place Edgar Schmued as lead engineer, Schmued decided to follow the best conventional aircraft design philosophies at the time but innovated as well, for example with the aid of the National Advisory Committee for Aeronautics (NACA) he created a new type of airfoil know as a laminar flow airfoils which produce very little drag at high speeds giving the aircraft superior handling at high speeds. Another innovation that was use was a new cooling system for the engine that took advantage of what is known as the "Meredith Effect" which happens when heated air exiting the radiator produces a slight amount of thrust thus if taken advantage off can add to an engines thrust potential. The aircraft will also be the first to have its fuselage lofted mathematically using conic sections, giving it smooth low drag surfaces and the airframe was divided into five sections to aid production and was made entirely out of Aluminum to save weight. Due to how many of these innovations at the time were consider radical designs NAA had to use the University of Washington Kirsten Wind Tunnel and the California Institute of Technology GALCIT wind tunnel in order to see if these will even work as indented in the first place which it turns out they did.

The prototype aircraft, dubbed the NA-73X was rolled out and ready for testing on September 1940, 102 days after the order was place and on October 26 1940, 146 days after the initial order the NA-73X flew for the first time making its development time one of the shortest in pre-jet era aviation, as 146 days of development was consider a very unusually short time even during war. However one obstacle remains in the way of the NA-73X being produce as the NA-73 and sent to the RAF, the USAAC. The USAAC had the power to stop any sales of US produce military aircraft to foreign power if it was to harm the US interest however the USAAC decided that the NA-73 was a special case and approve of the purchase since it was initially design for the United Kingdom with the first production model of the NA-73 being dubbed the North American Mustang Mark I by the RAF and NAA giving the USAAC two NA-73’s (serial number: 41-038 and 41-039) for evaluation purposes and later producing 57aircraft for the USAAC

While the RAF use their Mustang Mark I’s as ground attack aircraft the USAAC due to a combination of the USA not being involve in World War II, and the USAAC primarily serving as a peacetime force, decided to convert 55 of their Mustang’s into F-6A which was a photographic reconnaissance aircraft not a fighter since at the time the USAAC used the F designation to mark an aircraft as photographic not fighter, however they kept two unaltered Mustangs designated P-51-1 for testing purposes which prove to be rather fortunate for the aircraft future as when the USAAC was reorganize and became the USAAF six months before Pearl Harbor. Immediately after the reorganization it was decided that in order to prepare for any hostilities with the Axis powers the USAAF began stockpiling aircraft which while primarily focusing in buying P-38’s, P-39’s, and P-40’s did included 150 new P-51’s which were designated P-51and this variant became the first mustang to serve the USA as fighter aircraft.

The while at first glance the P-51appeare to be a copy of the RAF Mustang Mk I or the P-51-1 the P-51 had a major difference between it and its predecessors as it was armed with four long-barreled 20 mm (.79 in) Hispano Mk II cannon instead of the.30 caliber (7.62 mm) M1919 Browning machine guns used by its predecessors, and did not have the .50 cal "nostril"-mounted weapons, later on, the P-51 will be re-designated as the A-36 Apache while the RAF designated as the Mustang MKIA

After the Pearl Harbor attacks and the USA entering World War II at the side of the Allies the USAF discover that the P-51performance was exceptional at below 15,000 ft, however once it was past that altitude performance decline rapidly, this was due to the single stage supercharger on the Allyson V-1710 engine that power the aircraft being designed to produce maximum power at any altitude below 15,000 ft, pass that power drop rapidly. Contrary to popular belief this flaw was not a surprise to both the USA and the RAF as it was a commonly know flaw among aviation engineers and the USA had developed Turbochargers for the V-1710 to solve this problem on the P-38 yet it was deemed impractical to give the P-51 the Turbocharger, however despite this issue the P-51 aerodynamic was shown to be superior to that of the P-40’s using the same engine.

On June 23, 1942 the USAAF order 1,200 new mustangs designated P-51A in order to replace there P-51’s in the fighter role as the P-51 was being re-assign as an attack aircraft with the designation A-36 due to its armament and excellent performance at low altitudes. The P-51A was equip with The armament was changed to four .50 in (12.7 mm) Browning machine guns, two in each wing, with a maximum of 350 rounds per gun (rpg) for the inboard guns and 280 rpg for the outboard. The P-51A was also using the Allyson V-1710-81 engine as its powerplant, a variant of the V-1710 it was also faster and had better range than the P-51. But despite this it suffer from the same problem as the P-51as despite using a better version of the V-1710 it still suffer performance drop past 15,000 ft resulting in out of the initial 1,200 P-51A’s order by the USAAF only 310 were receive before Mustang production shifted from producing the Allyson power mustangs to producing the first of the Merlin power Mustangs, the P-51B

F-6A: photoreconnaissance conversion of the Mustang Mk.1 airframe used by the USAAC; 55 total where built

F-6B: a photo-reconnaissance variant of the P-51A that were equipped with K-24 cameras, 35 total where built.

Retrieved from "http://wiki.wargaming.net/en/index.php?title=Plane:P-51a&oldid=277784"
Categories:
Your location:
To log in, select the region where your account is registered
CIS Europe North America Asia
Or use Microsoft Login to enter WoT XBOX ecosystem
Log in