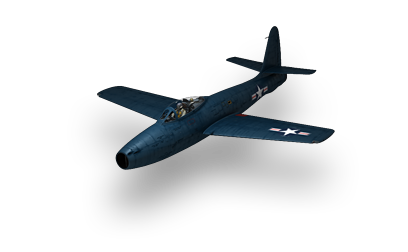 This plane is a modest upgrade from the P-47N, with slightly stronger rockets, somewhat stronger guns (though with two fewer of them), and slightly faster speed. Unfortunately, its enemies are significantly stronger, and usually have the altitude performance to keep up with you at any height. Therefore, you must be very careful when picking your fights. Lone bombers and attack aircraft are always a top priority. Don't be afraid to abuse your high roll rate to switch targets, since you probably won't get a second pass on them.

Fully upgraded, this plane has a 20 second boost, and a 120 second reload on bombs and rockets.

USA
ko:Plane:P-72ja:Plane:P-72
Retrieved from "http://wiki.wargaming.net/en/index.php?title=Plane:P-72&oldid=271116"
Categories:
Your location:
To log in, select the region where your account is registered
CIS Europe North America Asia Republic of Korea
Or use Microsoft Login to enter WoT XBOX ecosystem
Log in