1305000
One of the most successful modifications of the famous British fighter. A total of 5,656 aircraft were built. 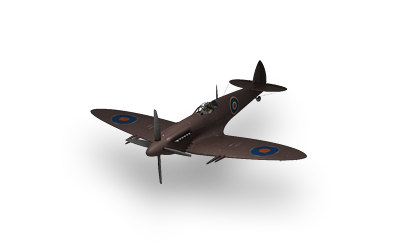 At Tier VII, the Spitfire IX improves the tried and tested abilities of the Spitfire line; but now pitting it against newer and more specialized warplanes. The Spitfire IX still retains its status as a Jack-of-All-Trades fighter but its age is starting to show. The Spitfire's solid maneuverability remains the same in this plane, and it will still punish sluggish targets as before. The 20mm Hispanos and .303 Browning light machine guns coming all the way from the Spitfire I are carried over at stock, but with newer and tougher planes to shoot down they will be underwhelming. Upgrading the guns yields an improved pair of 20mm Hispanos and two 12.7mm Brownings, with better damage but little else. While it isn't in the same situation as the P-51D, the Spitfire IX's guns barely stay competitive against planes with full-autocannon loadouts or large-caliber guns. The upgraded 20mm Hispanos still overheat fairly quickly, so aim your shots well and let it cool for a few moments like before. The good news starts with the upgraded engines as the Spitfire IX can now fly faster at mid-altitude to chase down slower planes. Unfortunately it remains outclassed by more specialized energy fighters, so stay alert when they're diving in or when you're trying to chase them down. Unlike previous Spitfires, this plane can safely dive down on low-altitude turnfighters with its improved optimum altitude. Use everything you've learned from previous Spitfires and you should carve your own niche in every battle with the Spitfire IX.

Retrieved from "http://wiki.wargaming.net/en/index.php?title=Plane:Spitfire-ix&oldid=290993"
Category:
Your location:
To log in, select the region where your account is registered
CIS Europe North America Asia Republic of Korea
Or use Microsoft Login to enter WoT XBOX ecosystem
Log in