892000
Developed in 1941 to replace the Spitfire I and Spitfire II. Widely used in Europe and North Africa. 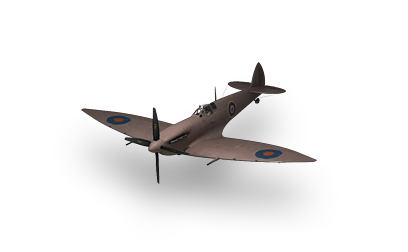 The Spitfire V will feel right at home after coming off of the Spitfire I. It's performance is very similar to its parent and should be played the same way. Using your maneuverability to turn fight and bringing your heavy 20mm cannons and short range .303 MG's to rip through them. A lot of components carry over, like the second engine and the essential 20mm cannons, so no painful grind to get those. Although it's well balanced, there are some downfalls. One is the lack of roll. Changing direction with rolling is very slow, making weaving enemies hard to track. Also, at tier VI, fast planes like the Mustang-A, I-210 and BF 109F will be able to outrun you and catch you without much trouble. Stay at a higher altitude and use your guns to destroy targets.

Upgraded version of the spitfire
click to read more...

Fighters
ja:Plane:Spitfire-v
Retrieved from "http://wiki.wargaming.net/en/index.php?title=Plane:Spitfire-v&oldid=277050"
Category:
Your location:
To log in, select the region where your account is registered
CIS Europe North America Asia
Or use Microsoft Login to enter WoT XBOX ecosystem
Log in