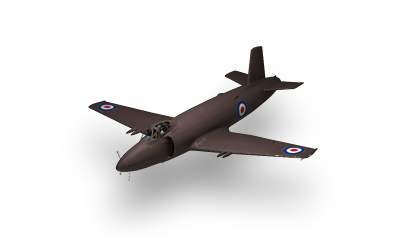 The best and last of the Spitfires, the Spitfire XIV polishes out everything players have come to know and respect about the British fighter line. Upfront it gets four 20mm autocannons and powerful Griffon engines, giving it firepower on par with the Tempest and airspeed fast enough to keep pace with most planes. It retains the good maneuverability of previous Spitfires and can reliably out-turn most planes. All these characteristics make the Spitfire XIV a true Jack-of-All-Trades among fighters and can switch between fast dive attacks and dogfights at will. Unfortunately this is also one of its weaknesses as it can't outrun true energy fighters and can't outmaneuver true turnfighters. While this is a recurring shortcoming of the Spitfire line, the Spitfire XIV is particularly vulnerable because it has to deal with high-altitude fighters and jets more often. Unlike previous Spitfires, you lack machine guns for finishing off crippled planes making trigger discipline a must. The 20mm Hispanos can shred lighter planes but will struggle against tougher planes like GAs and Bombers, so choose your prey with care. Stick to mid-altitude and pay attention to planes above and below you. Use everything you've learned from previous Spitfires and exploit weaknesses of other planes. Overall, the Spitfire XIV is a challenging and a rewarding finale to the British piston-engine fighter line before going up to the fighter jets at Tier IX and X.

Fighters
ja:Plane:Spitfire-xiv
Retrieved from "http://wiki.wargaming.net/en/index.php?title=Plane:Spitfire-xiv&oldid=292269"
Category:
Your location:
To log in, select the region where your account is registered
CIS Europe North America Asia
Or use Microsoft Login to enter WoT XBOX ecosystem
Log in