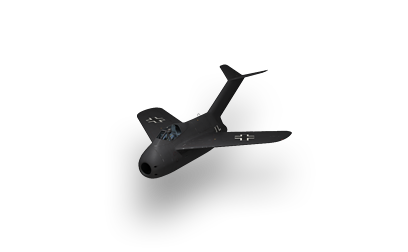 A clear break from the Fw-190 line, the Ta-152 is notorious for being one of the finest long-range shooters in the game. At stock it is poorly armed, but unlocking the modules on the Me-209A leads to the hub-mounted autocannons to ease the grind. The Ta-152 can be played similar to the Me-209A at this point, but once the wing-mounted 30mm autocannons are unlocked this plane's role changes dramatically. Three long-range 30mm guns turn the Ta-152 into a dedicated sniper that is ideally suited for cracking open planes from afar- and crack them open it does. Direct hits on fighters or multiroles can erase most of their health if not destroy them outright; bombers, heavy fighters, and GAs fare better only because of their larger healthpools. The Ta-152 is incredibly effective against bombers (and bomber squadrons) but will struggle against agile fighters and multiroles the closer it gets to them. Unfortunately the three 30mms share the same low rate of fire so aim your shots carefully and lead your target as the need arises. The Ta-152, unlike every Fw-190 before it, has decent maneuverability but is only useful for keeping track of your target or taking evasive action. Under no circumstance should you get tangled in with more maneuverable fighters- you'll never win unless you get lucky shots. Use your altitude performance to ambush planes from above, and your speed to get out of trouble. Keep your distance and crack your targets from afar. When played right, the Ta-152 can lay waste to enemy planes with near impunity.

Germany
Fighters
ja:Plane:Ta-152
Retrieved from "http://wiki.wargaming.net/en/index.php?title=Plane:Ta-152&oldid=290853"
Categories:
Your location:
To log in, select the region where your account is registered
CIS Europe North America Asia Republic of Korea
Or use Microsoft Login to enter WoT XBOX ecosystem
Log in