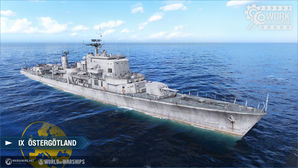 Last of a series of destroyers of the Swedish Navy. Due to their dimensions, which were quite small for the era, they are sometimes classified as "light" destroyers. Their main artillery armament comprised very successful 120 mm automatic dual-purpose mounts.

Östergötland is the Tier IX European destroyer, and a significant increase in power compared to the Tier VIII Öland. With this ship, the characteristic traits of the European destroyer lines can be considered fully developed, and as such it is a strong, well-rounded ship.

The most important improvement Östergötland gets over Öland is the addition of two extra torpedo tubes. This might not sound like much, but when captains have had to make do with six tubes on all the preceding ships, it really makes a noticeable difference, although she gives up a bit of reload time for it. The torpedoes also gain range and speed compared to the previous tier, making them even easier to land. As such, the ship is much improved in the torpedo boat role.

That does not mean though that the main battery should be overlooked, though. The damage output is very good for a destroyer of this tier, and while the range is short, Östergötland is more than capable of holding its own when fighting other destroyers. While it is hard use the main battery to engage bigger targets without taking a lot of damage in return, it is definitely possible to do so, and just as the other ships in this line, Östergötland lends itself well to an opportunistic playstyle. The short range on the main battery can sometimes be useful to get unspotted quickly after an engagement, for example.

What really makes Östergötland stand out is its ability to thrive in an adverse environment, much like the Tier X Halland. Once the upgraded hull is obtained its anti-aircraft battery is very strong, much stronger than Öland's, so aircraft carriers tend to stay away, at least early in the game. The long range and high speed of its torpedoes make it less sensitive to Surveillance Radar

than many other destroyers, and its strong main battery and access to Repair Party

makes it a hard nut to crack for other destroyers as well.

Östergötland is not the best for its tier in any particular category, but it's a very well rounded ship. It does have weaknesses, such as relatively low speed, low damage torpedoes, and a relatively small hit point pool, but these can be worked around.

The recommended upgrades for Östergötland are as follows:

Ships of Europe
Destroyers
Retrieved from "http://wiki.wargaming.net/en/index.php?title=Ship:Östergötland&oldid=317547"
Categories:
Your location:
To log in, select the region where your account is registered
CIS Europe North America Asia
Or use Microsoft Login to enter WoT XBOX ecosystem
Log in