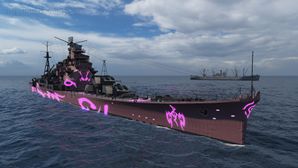 A Heavy Cruiser of the "Fleet of Fog," modeled after Takao, the lead ship of the Imperial Japanese Navy's Takao-class series of cruisers. This warship has been specially designed for World of Warships, and is modelled after the same-name ship from "ARPEGGIO OF BLUE STEEL -ARS NOVA-".

As a premium ship, ARP Maya doesn't have any upgrades to research.-->

The recommended upgrades for ARP Maya are as follows:

Atago is one of the fastest Tier VIII cruisers in the game; a Sierra Mike (

Ships of Japan
Cruisers
Retrieved from "http://wiki.wargaming.net/en/index.php?title=Ship:ARP_Maya&oldid=315252"
Categories:
Your location:
To log in, select the region where your account is registered
CIS Europe North America Asia Republic of Korea
Or use Microsoft Login to enter WoT XBOX ecosystem
Log in