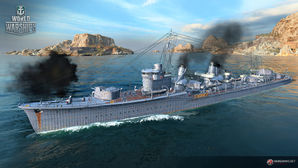 This ship belonged to the "special type" series of destroyers. In contrast to Fubuki-class ships, she had more efficient propulsion and boasted a substantially higher speed.

Akatsuki is the Tier VII entry in the IJN "torpedo boat" tech tree branch. While she can salvo one more torpedo than her "gunboat" counter-part Shiratsuyu, ironically she cannot equip the latter's Torpedo Reload Booster. Akatsuki also has a larger — and dual-purpose — main battery, raising questions as to which is the gunboat and which the torpedo boat.

In many ways, Akatsuki is a side-grade from Fubuki. She is largely the same as her immediate predecessor, with a few minor improvements.

Chief among these is a notable increase in her top speed. One of Fubuki’s more irksome negatives is her maximum speed of 35 knots; Akatsuki’s top speed bumps up to 38 knots. Her handling characteristics are almost the same as Fubuki as well, retaining her turning circle radius while losing time on rudder shift. Also improving is Akatsuki’s main battery. Though her guns are not her main damage dealer, she picks up two more barrels via an additional turret on the aft end of the ship. This makes her a more significant threat when she does decide to open up with her guns. The turrets themselves are the same as those on Fubuki, and they reload a little faster.

Akatsuki’s primary armament is in the same configuration as Fubuki’s — three triple-tube torpedo launchers — while having access to slightly better torpedoes in terms of damage. Her detection radius is slightly higher than her immediate predecessor's as well, so captains will have to be a touch more cautious in their positioning when there are enemy gunboat destroyers — such as Mahan or Kiev — in the mix. She is as vulnerable to enemy aircraft as most other destroyers as well, so when and enemy carrier is present, cautious play is recommended.

While Akatsuki is not a huge upgrade from Fubuki, the upgrades she does get are key to allowing her to remain competitive in her tier.

Hull (B) is the first recommended upgrade. Akatsuki’s stock torpedoes are more than sufficient for her to work with initially. Invest in the Torpedo module next, and grab the Fire Control System module last.

The recommended upgrades for Akatsuki are as follows:

Players who wish to spend doubloons can equip Akatsuki with Type 17 camouflage that lowers her detection radius, reduces the accuracy of incoming shells, reduces her repair costs, and increases the amount of experience she earns.

Juliet Charlie protects the player from the increased potential detonation chances which India X-Ray and Juliet Whiskey Unaone give. In exchange, the two flags provide a potential increase in damage (+0.5% fire chance and +15% chance to causing flooding respectively). There is no need to worry about Victor Lima's debuff (+4% chance of getting flooding), as Akatsuki is a destroyer and will most likely not survive a torpedo strike.

Sierra Mike provides Akatsuki a healthy boost to her speed (38 kts to 40 kts), and November Foxtrot provides that small but potentially life-saving decrease in cooldown timer for the mounted consumables.

Again, Equal Speed Charlie London will help speed up the player's XP grind and Zulu will help make a little extra credits for the player during the grind. Sierra Mike will give a more comfortable speed for players who wish to be able to cruise to their next target location during a battle. Juliet Charlie is optional for players who dislike being detonated. November Foxtrot is also optional, but if the player dislikes dealing with a disabled engine, rudder, or other vital module, then this can be coupled with premium Damage Control Party II for a more relaxing play. Zulu Hotel will increase commander training and retraining (if the player chose to use his captain from the preceding Tier VI destroyer Fubuki). 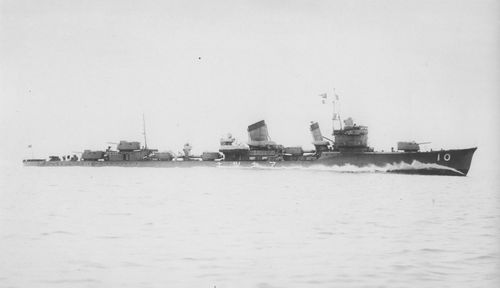 Akatsuki (暁 Dawn?) was the twenty-first Fubuki-class destroyer, or the lead ship of the Akatsuki class (if that sub-class is regarded as a separate class), built for the Imperial Japanese Navy in the inter-war period. Due to more efficient boilers, only 3, rather than 4, where installed, giving a distinctive look with a smaller round forefunnel. Subsequent Imperial Japanese Navy destroyers would later use 3 boilers for the same configuration of 2 steam turbines driving two shafts. When introduced into service, these ships were the most powerful destroyers in the world. They remained formidable weapons systems well into the Pacific War.

The Akatsuki destroyers were a sub-class of the Special Type design so successful in the Fubukis. Four were built.

DesDiv 6 (Akatsuki, Hibiki, Ikazuchi, Inazuma) All together at the beginning of the war, the destroyers of DesDiv 6 helped to cover the landings in Malaya and the Netherlands East Indies from December 1941 to April 1942. Returning to the Central Pacific, they joined the Aleutian diversionary force for the Battle of Midway in June 1942. After Midway, they were ordered to the South Pacific and participated in the Guadalcanal Campaign. Returning in 1943 to the Aleutians, the survivors of DesDiv 6 helped to evacuate Japanese forces there before serving as convoy escorts through 1944.

Akatsuki was sunk by surface gunfire during the First Naval Battle of Guadalcanal on 15 December 1942.
Hibiki survived the war and was awarded to the Soviet Union in 1947.
Ikazuchi was torpedoed by submarine and sunk on 13 April 1944.
Inazuma was torpedoed and sunk by submarine on 14 May 1944.

Ships of Japan
Destroyers
Retrieved from "http://wiki.wargaming.net/en/index.php?title=Ship:Akatsuki&oldid=313118"
Categories:
Your location:
To log in, select the region where your account is registered
CIS Europe North America Asia Republic of Korea
Or use Microsoft Login to enter WoT XBOX ecosystem
Log in