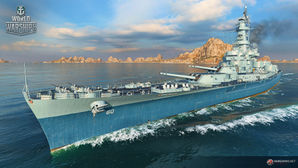 USS Alabama is now preserved as a military museum ship in Mobile, Alabama. Alabama first went on sale at the end of March 2017.

Alabama is a Tier VIII American battleship that shares many characteristics with her tech tree counterpart, North Carolina. The most obvious similarity is that both share the identical 16-inch, 45-caliber guns mounted in triple turrets in an AB-X configuration, as well as firing the same 13,100 damage AP shells. Both battleships also feature powerful suites of anti-aircraft guns that make them unappealing targets for same- or lower-tier aircraft carriers. Captains familiar with North Carolina’s primary, secondary, and AA armaments will feel right at home behind the helm of Alabama.

As a premium ship, Alabama has no upgrades to research.

The recommended upgrades for Alabama are:

In Slot 5, captains may wish to consider Torpedo Lookout System

. Alabama has a very good torpedo protection system (TPS) but is also agile enough to dodge with a little warning, especially with the steering upgrade in Slot 4.

Alabama can equip the following consumables:

As a premium ship, Alabama comes with Regular permanent camouflage and a set of permanent combat bonuses.

Ships of U.S.A.
Battleships
Retrieved from "http://wiki.wargaming.net/en/index.php?title=Ship:Alabama&oldid=319091"
Categories:
Your location:
To log in, select the region where your account is registered
CIS Europe North America Asia
Or use Microsoft Login to enter WoT XBOX ecosystem
Log in