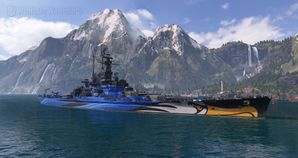 One of a series of the South Dakota-class battleships. Boasted powerful AA defenses and sophisticated surveillance systems. Had a sensible armor layout including an internal main armor belt and a solid horizontal protection.

Alabama VL is a Tier VIII American battleship that shares many characteristics with her tech tree counterpart, North Carolina. The most obvious similarity is that both share the identical 16-inch, 45-caliber guns mounted in triple turrets in an AB-X configuration, as well as firing the same 13,100 damage AP shells. Both battleships also feature powerful suites of anti-aircraft guns that make them unappealing targets for same- or lower-tier aircraft carriers. Captains familiar with North Carolina’s primary, secondary, and AA armaments will feel right at home behind the helm of Alabama VL.

The big things that set Alabama VL apart from North Carolina are her torpedo defense system — the best of any American battleship in the game — and her improved handling characteristics. With a two second faster rudder shift time and a 50 meter smaller turning circle radius, she is both better able to dodge incoming torpedoes and better able to withstand damage from any she is unable to avoid. While Alabama VL and North Carolina share the same bow armor scheme that enables them to better resist incoming fire when bow-on towards enemies, they also share the same citadel location; enemy battleships with broadside shots on Alabama VL can very easily strip off large amounts of her health, especially at longer ranges.

Captains who enjoy the play style of North Carolina will find Alabama VL to be an enjoyable ship, and will very much appreciate her improved torpedo protection and turning.

As a premium ship, Alabama VL has no upgrades to research.

The recommended upgrades for Alabama VL are:

In Slot 5, captains may wish to consider Torpedo Lookout System

. Alabama VL has a very good torpedo protection system (TPS) but is also agile enough to dodge with a little warning, especially with the steering upgrade in Slot 4.

As a premium ship, Alabama VL comes with Default permanent camouflage and a set of permanent combat bonuses.

Ships of U.S.A.
Battleships
Retrieved from "http://wiki.wargaming.net/en/index.php?title=Ship:Alabama_VL&oldid=321568"
Categories:
Your location:
To log in, select the region where your account is registered
CIS Europe North America Asia
Or use Microsoft Login to enter WoT XBOX ecosystem
Log in