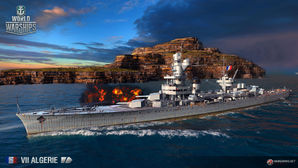 The last heavy cruiser built for the French Navy, and one of the best representatives of this type of ship in Europe. Among the cruisers of her time, she was distinguished by powerful armor and very good torpedo protection.

The following are recommended:

Algérie can equip the following consumables: 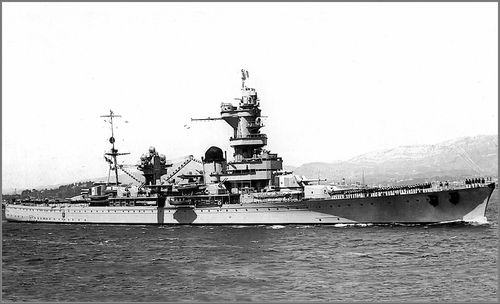 In 1930, the Marine Nationale was to receive another heavy cruiser following the Duquesne and Suffren classes. Using the experience gained in the construction of the six ships of the Duquesne and Suffren classes as well as advances in construction techniques and propulsion design, a large amount of tonnage was made available for additional protection.

Algerie's stock hull is a mash-up of two refits. Her current appearance resembles her August 1942 refit when the tripod mainmast behind turret "X" was replaced by a tiered deckhouse, designated pergola. The placement of the AA guns is correct. However, she had eight twin 37mm/50 Mle 1933 guns. Four are missing and they were mounted on the quarterdeck.

The anti-aircraft guns on Hull (A) is based on her July 1941 refit, when she still had the tripod mainmast. However, the placement of the AA guns is wrong. The four twin 37mm guns were on the quarterdeck. Two quad 13.2mm Hotchkiss MGs were at the forward end of the shelter deck and two more were on the AA platform above the bridge. One single mount 13.2mm MG was on the Director Control Tower (DCT), one on the quarterdeck and two on the shelter deck aft.

Ships of France
Cruisers
Retrieved from "http://wiki.wargaming.net/en/index.php?title=Ship:Algérie&oldid=318539"
Categories:
Your location:
To log in, select the region where your account is registered
CIS Europe North America Asia
Or use Microsoft Login to enter WoT XBOX ecosystem
Log in