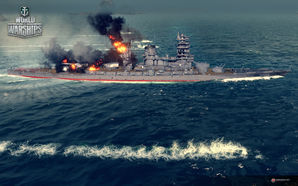 An upgraded battlecruiser design with very powerful artillery. Though outclassed by other battleships of her time in terms of armor, Amagi was superior to them in terms of speed.

Amagi has an impressive reputation among battleships at her tier. Sporting five dual turrets each packing a pair of 410mm guns — 10x 16.1" rifles — Amagi is unmatched in terms of raw broadside weight. In her current fit, the ship is a reformatted battlecruiser with changes much like those applied to her colleague Kongo resulting in excellent speed and a powerful main battery with a turtleback covered by a thin plating of armor. (see the Design section below)

Despite the solid appearance and heavy broadside weight, Amagi can take only so much punishment before she breaks. It is inadvisable to depend heavily on your armor, as at 32mm everywhere, she is very vulnerable to cruiser high-explosive as well as overmatch from Yamato and Musashi. The AA suite is not terrible, but not very good either. Only the 16x 127mm rifles can throw shells beyond short range. There are no medium-range AA defenses at all.

Taking into account her strengths and weaknesses, the best way to play Amagi is to stay at medium ranges and use her heavy and accurate broadside to get rid of the enemy cruisers and destroyers. Because of her 16-inch guns, she can overmatch all cruiser plating up to Tier X. Once they are cleared, then it's time for the fun to begin and you can start moving into brawling range. With her powerful broadside, she is more than capable of brawling with any battleship, even if they are Tier X.

The recommended upgrades for Amagi are as follows:

, which increases the survivability and reduces repair time of the main armament. If AA defense is more desirable, take Auxiliary Armaments Modification 1

to increase the survivability of AA and secondary battery mounts.

can be mounted instead to reinforce the long-range flak guns. A secondary build is not advised.

to perk up the lazy rudder.

Upgrade Slot 5 should be filled with Concealment System Modification 1

, which reduces ship detectability and increases dispersion of enemy shells fired at the ship.

Amagi can equip the following consumables:

; all of which improve surviveability. Another good signal to mount would be November Echo Setteseven

, to give Amagi`s AA a slight further increase for self-protection. If the captain insists on a Secondary Build, the addition of Mike Yankee Soxisix

will further improve the performance of the secondaries.

Limitations imposed by the 1922 Washington Naval Treaty prevented the class from being completed as designed. However, the treaty had a limited allowance for hulls already under construction to be converted into aircraft carriers. Amagi and Akagi were both intended for conversion, but an earthquake damaged the hull of Amagi so extensively that the ship was scrapped. Akagi was reconstructed as an aircraft carrier and served with distinction as part of the Kido Butai during the Second World War, participating in the Japanese attack on Pearl Harbor before being sunk at the Battle of Midway.

Amagi’s stock Hull (A) represents how the ship would have looked after a theoretical mid-1930's refit (had she been completed), while Hull (B) is a what-if variant circa 1944.

Ships of Japan
Battleships
Retrieved from "http://wiki.wargaming.net/en/index.php?title=Ship:Amagi&oldid=321389"
Categories:
Your location:
To log in, select the region where your account is registered
CIS Europe North America Asia
Or use Microsoft Login to enter WoT XBOX ecosystem
Log in