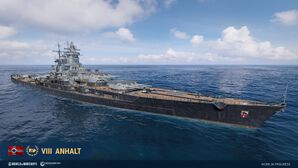 A battleship with an unconventional layout design, armed with 15 main battery guns and 700 mm torpedo launchers.

Anhalt was first released for sale on 16 September 2022.

Among the various Tier VIII German battleships, Anhalt stands out as a peculiar vessel. Similar to Mecklenburg, she is all about her shell volume. She mounts a large amount of small caliber guns on a well-armored hull, and also carries torpedoes with wide firing angles.

As with most German battleships, Anhalt features strong armor protection. She has a 350 mm main belt, with a 250 mm upper belt and 260 mm lower belt providing additional vertical protection. Her casemate section is protected by 170 mm armor, and extended 200 and 170 mm belt sections cover the lower parts of her 32 mm bow and stern. Anhalt’s 50 mm deck and small superstructure protect her against most cruiser caliber HE and SAP. Her HP pool of nearly 70,000 is also one of the largest among Tier VIII battleships.

In contrast to most German battleships, Anhalt’s turtleback is poor. At only 30 mm thick, it is overmatchable by 431 mm+ AP shells, which are more common when facing higher tiered opponents. Combined with a waterline citadel, battleships will have no issue penetrating her citadel if she exposes her broadside.

With such a long hull, Anhalt’s maneuverability ranks among the worst of Tier VIII battleships. Her 900 m turning circle is poor, as is her 16 second rudder shift. Her slow 25 knot top speed only compounds this weakness. In contrast, her concealment is among the best, at 12.2 km detection when appropriately specced. This combination of traits makes Brisk highly attractive in order to improve her speed in many situations. It also means captains should be cautious in their positioning, as Anhalt’s slow speed makes retreating from combat difficult.

Anhalt's standout feature are her guns. She has the most main battery guns of any Tier VIII battleship, with fifteen 350 mm guns in a unique five-by-three layout. These guns are the same as those on Tier VI Mackensen, with slightly reduced AP damage. Despite poor penetration for the tier, AP should be the primary shell choice. While they struggle to penetrate the main belts of same tier and higher battleships (and some cruisers), they can still penetrate and deal large amounts of damage against the upper belt and superstructure. Anhalt’s salvo weight and decent accuracy help compensate for her penetration, allowing captains to reliably hit those sections. She also has good reach with a 21 km firing range. Her HE shells retain the poor damage of most German HE shells, as well as a low fire chance, and should be avoided unless absolutely necessary. Despite her gun count, her average 30 second reload does little to improve her HE damage potential.

Anhalt also mounts a respectable secondary battery of six twin dual-purpose 105 mm and eight single 150 mm casemate guns. With their improved penetration and dispersion, they can be a threat to destroyers who stray too close and a useful tool in close-quarters combat. However, captains should avoid speccing into a secondary build, as her secondary firepower is significantly worse compared to other Tier VIII German battleships and Massachusetts. Her speed also limits her ability to bring the secondaries to bear, especially against targets moving away from Anhalt.

Anhalt carries four torpedoes, split evenly between the bow and stern. While the launchers themselves are fixed, they feature the Torpedo turning mechanic of the British battlecruisers, giving them wide firing angles. This gives her an almost 360 degree torpedo coverage, allowing her to minimize exposure when firing them. They have a fast reload and decent damage, but short range, which limits their use. Captains should keep in mind their slow speed and long arming time, giving agile targets more than enough time to avoid them. With only one torpedo per quadrant, they will be unable to kill a target that isn’t already on low health.

Anhalt’s AA is weak. While her 5.2 km range is decent, only her short range mounts provide meaningful damage. Captains should seek allied air cover for protection if carriers pose a significant threat.

, and a choice between Spotting Aircraft

. While the fighter can give her additional protection against enemy aviation, the spotter is preferred to extend her reach, as her slow speed means she can easily be left out of the fight. Unlike most German battleships, Anhalt lacks their famous Hydroacoustic Search

Anhalt is best suited for mid range combat. Her concealment allows her to get into position, and her armor and firing angles help her survive under fire. Her secondaries and torpedoes will be useful if forced into close range, while her main battery range and spotter keep her a threat at long range. However, captains should take care not to stray into either of these combat ranges — too close and she’ll be unable to disengage due to her speed, too far and she will struggle to respond to changes in the battlefield.

Anhalt’s potential rests heavily on positioning, with her slow speed and small caliber heavily punishing captains who find themselves out of position. Those who are able to grasp her characteristics will find her a different beast compared to her same-tier German counterparts. While most of them are famous for their powerful secondary batteries, Anhalt relies on her main battery shell volume and great tanking ability to make an impact in battle.

As a premium ship, Anhalt has no module upgrades to research.

As a premium ship, Anhalt comes with Default permanent camouflage and a set of permanent combat bonuses.

Ships of Germany
Battleships
Retrieved from "http://wiki.wargaming.net/en/index.php?title=Ship:Anhalt&oldid=324395"
Categories:
Your location:
To log in, select the region where your account is registered
CIS Europe North America Asia
Or use Microsoft Login to enter WoT XBOX ecosystem
Log in