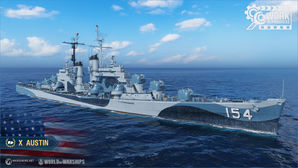 A light cruiser project (CL-154) that was developed at the end of World War II. The ship's main armament comprised the latest 127 mm dual-purpose mounts.

Austin became available in the Armory for Steel on 17 March 2021.

The only real way to explain Austin is to compare her to her nearest counterpart in game USS Atlanta. Both are USN light cruisers armed with five inch rifles and torpedoes. Both are good anti-aircraft platforms for their respective tiers. Both are thinly armored ships easily punished if caught flatfooted. That said, captains should be aware that the minor differences between these two ships can cause serious differences between their respective play styles.

The main battery for Austin consists of twelve 127mm guns arranged in six turrets with two rifles each. Unlike with Atlanta she finds herself missing her wing turrets which decreases her broadside by a pair of rifles. While this doesn’t drastically change the damage output of the ship it can be noticeable at times in terms of a ship surviving or not. This also plays a role in the amount of fires set as there are fewer shells to cause a potential fire. Armed with high-explosive (HE) and semi-armor piercing (SAP) shells she is a menace against destroyers she encounters as either shell type will inflict heavy damage. Against cruisers captains again should be mindful that she has no armor piercing like her tier VII contemporary. This means she gets more forgiving ricochet angles and thus can engage ships presenting more angle than with contemporary armor piercing. Combining this with decent damage values for her semi-armor piercing shells it allows her to carry her weight where Atlanta could not. Captains would be advised to stick with high-explosive if the battleship has more plating then 32mm. However when dealing with battleships. Austin does also get another advantage over Atlanta in the form of a Main Battery Reload Booster

. This allows captains to bring her 8 second base reload down to a sub 2 seconds and all but literally rain fire upon her enemies.

Austin sports a pair of quintuple torpedo mounts located amid ship. Players familiar with Fletcher torpedoes will be quite comfortable with the 10.5 km range and 66 knot running speed. This gives captains a luxury not offered to many other USN cruisers. Utilizing her decent speed captains can utilize these torpedoes to flush out enemy destroyers hiding within smoke or laying an ambush of their own. Furthermore, with the right modifications and crew skills Austin can in theory fire her torpedoes without being detected but this at best gives captains only a kilometer to work with. Aside from their primary offensive use, captains may also make use of these torpedoes to help gauge an enemy’s speed and direction to better aim her main battery or choose a position to attack from.

Like most late tier American cruisers she brings a fantastic amount of anti-aircraft fire to the table. With six 76mm anti aircraft guns in three turrets per broadside, Austin is already boasting decent anti-aircraft power; she doubles down with dual purpose main battery guns. What this entails is that from 4km’s out she is averaging 422 damage per second, making her arguably the strongest USN anti-air cruiser in the game as of this writing. Sadly, while she does also benefit from the Defensive AA Fire

consumable, she does not have unlimited charges as does Atlanta.

Austin players will find that she has the smallest health pool of the Tier X cruisers with only 30,700 points. To put this in perspective, she only has 3,200 hit points more than Atlanta found three tiers lower. With the thickest armor outside of her citadel 32mm thick she is quite fragile compared to same tier cruisers. While this is thankfully thicker than the 13mm plate found on Atlanta, shells that would normally over pen Atlanta will arm against Austin and deal far more damage. Thankfully, she comes equipped with a Repair Party

consumable allowing captains to heal back some of the health lost in battle and help extend the life time of the ship.

Captains who enjoy playing in Atlanta will probably enjoy Austin as she is. There are some similarities in their overall play style but captains should be aware that there are several key distinctions. The first major distinction from Atlanta comes from a lack of Surveillance Radar

. Thus while she is effective at removing destroyers from the battle like her contemporary, she shouldn’t be leading charges into caps and contesting against enemy destroyers. Captains could arguably spec into improving her mobility and utilizing her Hydroacoustic Search

. Use the traditional strategy of islands for cover and high shells arcs to clear them. Building upon the idea of improving maneuverability some captains may prefer to spec her for open water firing to which can have some success but this requires a combination of skill, luck, and captain builds which make it hard to recommend of USN light cruisers is the best course of action much like with Atlanta. Combine this with solid torpedoes, access to Defensive AA Fire

consumables. Austin excels at locking down key points on the map and whittling down enemy ships unlucky enough to enter her sights.

As a premium ship, Austin has no modules to research.

The recommended upgrades for Austin are:

in Slot 4 may be preferred.

As a premium ship, Austin comes with Type 20 camouflage that lowers her detection radius, reduces the accuracy of incoming shells, halves her service cost, and increases the amount of credits and experience she earns.

While Austin was never built there have been a handful ships in US service that DID share her name.

Ships of U.S.A.
Cruisers
Retrieved from "http://wiki.wargaming.net/en/index.php?title=Ship:Austin&oldid=315357"
Categories:
Your location:
To log in, select the region where your account is registered
CIS Europe North America Asia Republic of Korea
Or use Microsoft Login to enter WoT XBOX ecosystem
Log in