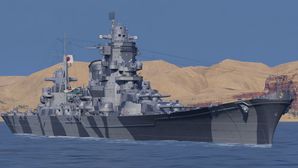 A powerful high-speed ship (Project B-65) designed to destroy American heavy cruisers and confront Alaska-class "large cruisers". Some design solutions were borrowed from Yamato-class battleships. She was armed with nine 310 mm guns and had good anti-torpedo protection.

Azuma was first released for sale worldwide on 1 April 2019.

Tier IX Premium Japanese cruiser Azuma is in the same "large cruiser" category as her counterparts Alaska and Kronshtadt. Azuma is well suited for long range fights, featuring nine 310mm guns in a 3x3 layout that have high velocity, flat arcs, and strong performance from her high explosive rounds. The main battery performance is the primary strength of the ship.

Azuma’s 310mm guns are the longest-ranged of the large cruisers found at Tier IX, clocking in at a base range of 19.1km before Gun Fire Control System Modification 2

. Though they still lag behind Kronshtadt some, her shell velocities are noticeably better than Alaska, making her gunnery fairly comfortable to use all the way out to her maximum range. Befitting her Japanese origins, she has the best HE alpha damage and fire chance of all the 12-inch armed cruisers, though her AP shell damage lacks slightly to that of her peers. The penetration values of her armor-piercing shells run about 10-15% lower than Kronshtadt at all ranges, but are pretty comparable to Alaska along the same curve. Overall, her main battery performance is a nice middle ground between the large cruisers already in the game: better HE performance than the rest, and comparable AP performance (though she lacks Alaska’s improved auto-bounce angles).

It's a good thing Azuma has all that main battery range to play with: of the Tier IX large cruisers, Azuma is by far the least durable, featuring no plating thicker than 25mm other than her internal belt and deck armor. This means she is exceedingly vulnerable to high explosive rounds at nearly all ranges and angles — as well as being overmatched by all 380mm class or larger battleship guns — in addition to her citadel spaces extending above the waterline. Azuma also has a fairly mediocre anti-aircraft suite, with the majority of its strength concentrated in long-range flak bursts that a skilled carrier player will easily dodge. Azuma has decent mobility, with a top speed of 34 knots and average rudder shift and turning circle for her class of ships, and can reduce her concealment to 11.8km when fully built for it. Consumable wise, Azuma features standard cruiser consumables with the exception of her Repair Party

, which has a reduced cooldown compared to the usual version.

These characteristics combine to make Azuma very one-dimensional to play. She is very good at farming damage at range, but her armor scheme and thin plating make her vulnerable at close quarters, forcing her into a long-range, kiting play style that has lower influence on the outcome of games. She is unable to approach close to key capture areas until late game situations where there are fewer ships to focus fire her, but given her armor scheme and detection radius, surviving into the late game will be a challenge for most captains.

As a premium ship, Azuma has no upgrade modules to research.

The recommended upgrades for Azuma are as follows:

. However, some players may opt to mount Damage Control System Modification 2

however some players may opt to mount Steering Gears Modification 2

to further their ability to dodge incoming fire.

Azuma can equip the following consumables:

As a premium ship, Azuma comes with Default permanent camouflage and a set of permanent combat bonuses. 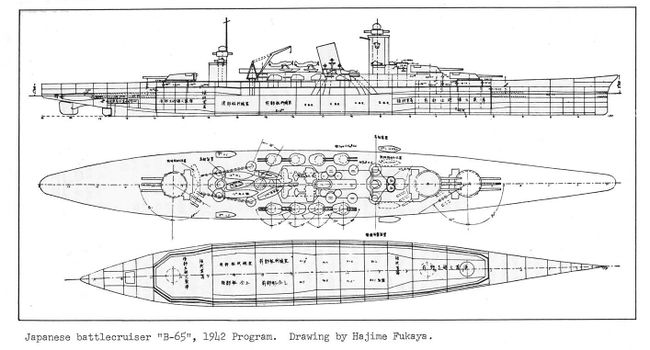 The decisive victory over the Imperial Russian Navy at the Battle of Tsushima in the Russo-Japanese War of 1904-1905 was the catalyst of what became the Imperial Japanese Navy’s “Decisive Battle” doctrine. This strategy consisted of four primary components; a decisive surface fleet engagement with big guns, attrition tactics, quality over quantity, and nighttime torpedo attacks. When the Washington Naval Treaty was signed in 1922 limiting the size of Japan’s fleet to be greater than that of Italy and France, while lesser than that their more likely enemies of the United Kingdom and the United States, the emphasis of the Decisive Battle doctrine became all-encompassing in the Imperial Japanese Navy.

In 1936, the IJN formed the Night Battle Force. This force would attack the enemy’s outer defense ring of cruisers and destroyers at night to break through and launch torpedo attacks on the enemy’s battleships. What remained of the enemy fleet would be defeated by the IJN’s battle fleet the following day. To protect the Night Battle Force, a division of fast battleships or battlecruisers were assigned to the force. Initially the Kongo-class battlecruisers were chosen, and were modernized to fast battleships during the 1930s. The Japanese plans, however, intended to eventually replace the Kongo’s with four heavy and brand-new ‘super’ cruisers.

As originally envisioned in 1936, these ships — what would later become the B-64 and B-65 cruisers — would carry 12” guns, be protected by armor against 8” shells, and be capable of speeds up to 40 knots. These ships were designated as the “Super Type A” cruisers, and a total of six were planned to be ordered, two in the Circle Five Program production order set to begin in 1942, and the remaining four in the Circle Six Program production order that was abandoned in the early stages of planning due to the Japanese entry into World War II and shifting priorities. Ultimately, no ships of this type were ever ordered or laid down.

Ships of Japan
Cruisers
Retrieved from "http://wiki.wargaming.net/en/index.php?title=Ship:Azuma&oldid=324419"
Categories:
Your location:
To log in, select the region where your account is registered
CIS Europe North America Asia
Or use Microsoft Login to enter WoT XBOX ecosystem
Log in