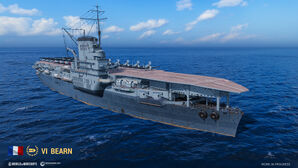 The first aircraft carrier of the French Navy, which was converted from an unfinished Normandie-class battleship. She had a power plant combining turbines and steam machines, unique for her ship type.

Béarn was first released for sale in December of 2021.

Béarn is a support carrier that can specialize in a more defensive playstyle. Her strike planes are solid, but her fighters are amazing. Due to this, this carrier does well in counter carrier tactics which can be effective in randoms but even more so in ranked.

Skip Bombers: Her skip bombers are effective against all ship classes. The bombs have solid alpha, good fire chance, and break the 26mm and 32mm armor threshold for battleships all the way to tier 8. They are also accurate and only skip two times therefore making them easier to aim which helps hit destroyers more consistently. A full squad drops 4 bombs per attack run and can make 4 attack runs with a single squad, making Bearn quite effective against destroyers.

Dive Bombers: The dive bombers are only effective against capital ships. Unlike other carriers in tier, each attack run drops four AP bombs instead of two, making her damage output more consistent. However, the AP bombs have low alpha and lower pen, and thus require proper reticle lineup and careful target selection to get the full value out of each drop.

Patrol Fighters: Finally, the high-power patrol fighters are what makes the Bearn unique. With high health and a large patrol radius, these fighters resist anti-aircraft fire and greatly restrict enemy aircraft movement. Unlike other carriers in tier, Béarns fighters come in squadrons of eight instead of three. Thus, with a successful lock-on, one fighter deployment can shoot-down an entire enemy attack squadron. With a long 100 second base action time, these fighters pose a significant threat across multiple enemy attack waves. Furthermore, as each squadron type carries eight consumables, Béarns can maintain fighter coverage during the entire match. The fighters' only weakness is a substandard 2km spotting range. To mitigate this, captains can run Interceptor to increase patrol radius and grant immunity to counter-fighter deployments. However, spotting may still be desired so captains should spec into Search and Destroy and Enhanced Reactions to get the most out of Béarn.

When commanding the Béarn, captains should look for air space to deploy their patrol fighters with every single plane deployment. Doing this properly will slow down or completely counter the opposing CV. However, keep in mind that Béarnshould also be striking enemy vessels as much as possible. Thus, fighters should be strategically dropped in a time-efficient manner on the way to your target.

As a premium ship, Béarn has no module upgrades to research.

Captains should build Béarn for a full defensive build or for a semi offensive support build. This decision revolves around whether or not your commander is specialized with the interceptor skill.

The recommended upgrades for Béarn are as follows:

It is recommended to use Philippe Auboyneau for improved Survivability Expert.

The consumables available for the ship and each plane type for Béarn are the same as the other T6 CVs and are as follows:

Béarn comes with Type 10 permanent camouflage that lowers her detection radius, reduces the accuracy of incoming shells, reduces her service cost, and increases the amount of experience she earns.

As a carrier, Béarn has no risk of detonating.

Béarn, named for a historical province, was an under-construction Normandie-class battleship in the 1920s which was converted into an aircraft carrier.

Her intended use was to develop tactics and techniques for carrier aviation operations. She would undergo five refits before the beginning of World War II as these tactics and techniques developed. The forward elevator had a unique two-story design so that, when lowered, the flight deck could still be used. In March 1936, Béarn launched a Potez 565, marking the first time in history a twin-engined aircraft operated from an aircraft carrier.

With her only involvement being training pilots off the coast during the early stages of the war, Béarn remained the only aircraft carrier France produced until after World War II.

In June 1940 Béarn was diverted to Martinique in the French West Indies when the French signed an armistice with Germany. She was underway to purchase and return with a load of aircraft from the United States. Concerned that Germany would take control of Béarn if she returned to France, the United States pressured the local commander to immobilize her in mid- 1942. In 1943, the Vichy government ordered her to be sabotaged. Eventually following the order the local commander ran her aground and flooded the boiler room.

After the islands joined the Free French later that year, she was towed to Puerto Rico for preliminary repairs. This allowed her to sail to New Orleans, Louisiana, for conversion into an aircraft ferry. This refit was completed in early 1945, and underway with her first load of aircraft she Collided with another ship. This forced her to divert to French Morocco for six months of emergency repairs. Once seaworthy again she transported personnel and equipment between Metropolitan France and French North Africa for several months.

In October she sailed for French Indochina with aircraft, material, and supplies. Returning home a year later Béarn was immediately placed in reserve. After two years she was reactivated as the Marine Nationale's submarine flagship and served as a sub tender. In 1960 Béarn was stripped internally and configured as a barracks ship. In 1966 she was deemed uneconomical to keep afloat and replaced by a newly constructed barracks vessel. She was sold for scrap the following year.

The text has been adapted from [1] and the adaptation is made available under the Commons Attribution-ShareAlike License 3.0.

Ships of France
Aircraft Carriers
Retrieved from "http://wiki.wargaming.net/en/index.php?title=Ship:Béarn&oldid=322125"
Categories:
Your location:
To log in, select the region where your account is registered
CIS Europe North America Asia
Or use Microsoft Login to enter WoT XBOX ecosystem
Log in