Homepage/
World of Warships/
Battle of the North Cape Collection

Battle of the North Cape Collection

By the end of 1943, the German army was suffering repeated defeats on the Eastern Front with the Soviet Union. The Allies resumed escorting convoys through the Arctic Circle to deliver equipment and armaments to the Red Army. All large ships of the Kriegsmarine were gathered in Norway in an effort to prevent this. The British forces, with the assistance of the Norwegian resistance, were closely monitoring their location and movements, grasping every opportunity to incapacitate enemy ships. In December 1943, only battleship Scharnhorst and a few destroyers were staying combat-ready in Norway. To draw the armored beast from its lair, the Allies sent another convoy, JW-55B, on a course dangerously close to the Norwegian coast. A few hours from the convoy, the Distant Cover Force, headed by HMS Duke of York, the flagship of the Home Fleet's Commander-in-Chief Vice Admiral Fraser, was steaming ahead, under the cover of a storm.

Much was at stake: the shattered reputation of the Kriegsmarine, the last capable battleship of Germany, and a strategically important line for aiding the struggling Soviet Union. 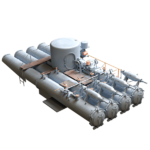 During the Battle of the North Cape, Allied ships launched 55 torpedoes, 47 of them were launched by seven British destroyers. They had 533mm quadruple torpedo tubes. HMS Musketeer and HMS Matchless were carrying the Mk.X tubes. The rest of them were equipped with slightly different Mk. VIII tubes. The 533-mm Mk. IX torpedoes contained 367 kg of explosives and could hit a target at a 10 km distance at a speed of 41 knots. At least 11 of these torpedoes hit Scharnhorst in her last battle. 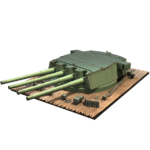 Throughout shipbuilding history, quadruple main gun turrets were rarely taken seriously due to design complexity. An exception was made for the King George V-class battleships to which HMS Duke of York belonged. Each ship carried ten 356mm Mk.VII guns, which mounted in one Mk. II twin turret and two Mk. III quadruple turrets. In the Battle of the North Cape, Duke of York scored a hit on the first salvo, disabling Scharnhorst’s foremost turret. During the next two hours of the battle, the German battleship lost all of her combat capability after taking more hits from Duke of York’s main guns. 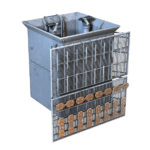 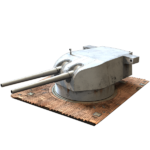 HMS Norfolk belonged to the third series of County-class heavy cruisers designed under the Washington Naval Treaty of 1922, which defined such cruisers as warships of up to 10,000 tons displacement carrying guns no larger than 203mm in caliber. The ship's eight 203mm guns were placed in the Mk. II twin turrets to make up one of the most efficient artillery systems of the time. The guns had high armor penetration capacity and great destructive power, sending four to five rounds per minute at a range of up to 28 km. At North Cape, Norfolk was the first to hit Scharnhorst. A shell fired from the cruiser's main battery knocked out the German battleship's forward radar. 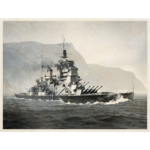 The flagship of the Home Fleet, HMS Duke of York, carried 356mm guns and was equipped with the latest artillery radars. The ship played a key role in the operation to destroy the German battleship Scharnhorst in December 1943.

According to the plan, the British cruisers were to force Scharnhorst to change course towards battleship Duke of York, and they succeeded. In the battle that ensued, Duke of York, despite her main guns malfunctioning, maintained a very high rate of fire, hitting the enemy over and over again. In total, in the Battle of the North Cape, the British battleship fired 450 main caliber shells, incapacitating almost all artillery guns aboard the enemy warship and forcing her to reduce speed, after which Scharnhorst was finished off by torpedoes. 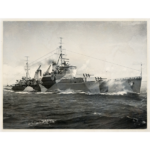 HMS Jamaica was a light cruiser of the Fiji class (also known as Crown Colony class). Laid down just before the outbreak of World War II, the ship started her wartime career in the middle of 1942.

In December 1943, HMS Jamaica served as part of the force lead by battleship Duke of York. In the Battle of the North Cape, the cruiser kept pace with her flagship, scored a hit with her first salvo, and maintained an unprecedented rate of fire. The total number of 152 mm shells fired by Jamaica reached 461, which exceeded the efficiency of any other British cruiser that participated in that battle. In the final stage of the battle, Jamaica managed to launch torpedoes from both of her torpedo tubes and scored one or two hits. 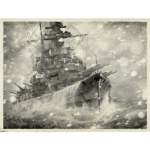 Battleship Scharnhorst was commissioned into the fleet in 1939. She was one of the first "high speed" battleships of the new generation. The maximum speed of this well-armored giant — with a displacement of 37,000 tons — was 31 knots. None of the Allied ships that could pose a threat to her could keep up with her.

The intention of Germany to respect the international restrictions in the early stage of designing the ship resulted in the fact that only 283mm guns were mounted on her. That meant she could be classified as a battlecruiser, and reduced her capability to face the newest British battleships on an equal footing. 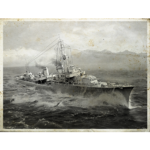 Besides Scharnhorst, the Kriegsmarine force that was operating in Arctic waters in December 1943 included the 4th Destroyer Flotilla comprising five ships. Two of them — Z-29 and Z-30 — were of the 1936A class; the remaining three — Z-23, Z-34, and Z-38 — were classifed as 1936A (Mob). All these ships were armed with four or five 150mm guns and two quadruple 533mm torpedo tubes. Their maximum speed could reach 37 knots.

While searching for the Allied convoy on the morning of 26 December 1943, due to stormy weather and arctic night conditions, the destroyers lost sight of their flagship just before the first engagement with the British ships. After a few hours, the commander of the German naval force, Konteradmiral Bey, ordered them to return home. In the battle that followed, Scharnhorst was left alone and sunk. The destroyers, which could have seriously disrupted the actions of the British forces and provided a chance for Scharnhorst to escape the trap, safely returned to the Norwegian fjords without even facing the enemy. 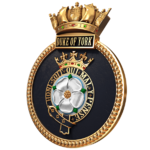 Badge of Battleship Duke of York

HMS Duke of York, a battleship of the King George V class, entered service in 1941. The ship's badge depicts a white rose--the heraldic symbol of the House of York and the Dukes of York--as well as the elements and the Motto of the Order of the Garter that is regarded as the most prestigious British order.

In December 1943, battleship Duke of York was the flagship of Vice Admiral Fraser, commander of the Home Fleet, playing a crucial role in the destruction of German battleship Scharnhorst at the Battle of North Cape. 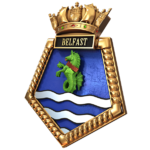 HMS Belfast, commissioned in 1939, belonged to the last series of Town-class light cruisers. The ship's badge portrays a mythological hippokampus (seahorse), derived from the Coat of Arms of the city of Belfast, the cruiser’s namesake.

At the Battle of the North Cape, Belfast was the flagship of the 10th Cruiser Squadron commanded by Vice Admiral Robert Burnett. Belfast was the first to make radar contact with Scharnhorst, and later took the lead in the pursuit of the German battleship. 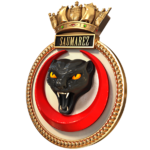 HMS Saumarez, commissioned in 1943, was an S-Class Flotilla Leader that served with the 5th Emergency Flotilla of destroyers designed specifically for operations in the Arctic waters. The ship was named after a prominent British naval commander of the 18-19th centuries.

In December 1943, Saumarez, along with three other same-class destroyers, operated within the Distant Cover Force escorting the JW-55B and RA-55A convoys. The ship took part in a torpedo attack on Scharnhorst. Despite losses in men and damage to the ship, Saumarez fired four of her torpedoes from a range of about 1,600 m, expecting, along with HMS Savage, to score two to three hits in total. 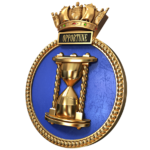 HMS Opportune, commissioned in 1942, was an "O"-class destroyer, one of the first ships of her class built under the War Emergency Program to serve with the so-called Emergency Flotilla of destroyers.

In December 1943, Opportune and other destroyers of the 36th Division were escorting convoy RA-55A were detached from the convoy and deployed to join the pursuit of Scharnhorst. The ship took part in the final torpedo attack on the limping battleship, scoring two successful hits.

Battle of the North Cape Collection - Awards and Flags 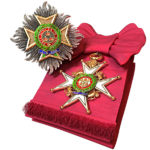 Grand Cross of The Order of the Bath

The Most Honourable Order of the Bath is one of the most senior British Orders. Established by George I in 1725, the name of this award is derived from a ritual bath ceremony that was part of the ceremony conferring knighthood in England. This order for military officers was made as a cross bearing the motto Ich Dien (German for "I serve").

The Commander in Chief of the Home Fleet, Bruce Fraser, was appointed to the Order of the Bath as a Knight Grand Cross for victory in the Battle of the North Cape. Besides this, he was promoted to full Admiral, awarded the Order of Suvorov, First Degree, and, after the war, was raised to the peerage as Baron Fraser of North Cape. 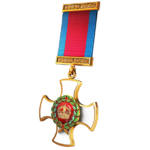 The Distinguished Service Order was established in 1886 by Queen Victoria to be awarded to officers for distinguished service during active operations. A cross-shaped order was made of white enamel and was ornamented by the Imperial Crown surrounded by a laurel wreath. The cross was worn on a red ribbon with blue stripes that was also decorated with laurel leaves. 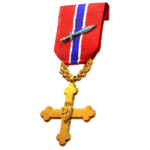 The War Cross With Sword (Norway)

The War Cross was established in 1941 by royal resolution of the Norwegian King Haakon VII, who was in exile during the German occupation of Norway. This medal for outstanding actions in combat became the highest military decoration in Norway.

Norwegian destroyer Stord was one of the ships that participated in the sinking of battleship Scharnhorst. The British command paid tribute to the courage of her personnel and her special role in the battle. Destroyer Stord was commanded by Skule Storheill, the future Vice Admiral of the Navy of Norway who was honored with the War Cross. 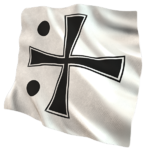 This command flag was hoisted above the ship with a Force Commander holding the rank of Admiral onboard. The flag fully mirrored the ensign of Imperial German Navy Konteradmiral: the Iron Cross with two black circles on a white square background.

In November 1943, Konteradmiral Erich Bey, Commander of the Kriegsmarine destroyers, assumed command of the German Force operating in the Arctic. He raised his flag on the only large ship of the Force, battleship Scharnhorst, and perished together with her in the Battle of the North Cape, on December 26, 1943.

Retrieved from "http://wiki.wargaming.net/en/index.php?title=Ship:Battle_of_the_North_Cape_Collection&oldid=282576"
Category:
Your location:
To log in, select the region where your account is registered
CIS Europe North America Asia Republic of Korea
Or use Microsoft Login to enter WoT XBOX ecosystem
Log in