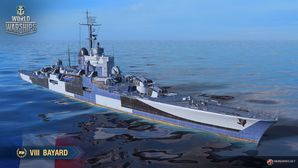 A version that constitutes a further development in cruiser De Grasse's initial design, featuring greater firepower as a result of increasing the number of main turrets to four.

Bayard is a Tier VIII French cruiser primarily excelling in 'run and gun' tactics. She is equipped with a powerful Engine Boost

consumable which enables her to reach a very high sustained top speed, especially when used in tandem with a Sierra Mike signal flag. She sports medium caliber guns, similar to those found on the Tier VI French premium cruiser De Grasse, with the added bonus of having an additional turret. These turrets are relatively quick to traverse and feature a quick reload time, which can be further accelerated by utilizing the Main Battery Reload Booster

Bayard serves best in open water environments, utilizing her speed and agility to dodge enemy fire. If cornered, she has a torpedo armament to defend herself. Bayard will likely benefit from division play wherein the player is escorted by a destroyer or cruiser with a smoke generator to provide portable cover or a way to return to concealment when an engagement goes wrong. Bayard will be punished by medium and large-caliber armor-piercing (AP) rounds. For this reason, it is critical to maintain a reasonable distance from enemy capital ships in order to provide a small window of time to employ evasive maneuvers.

As a premium ship, Bayard doesn't have any upgrades to research.

The recommended upgrades for Bayard are as follows:

should be mounted in Slot 2.

Bayard can equip the following consumables:

As a premium ship, Bayard comes with Default permanent camouflage and a set of permanent combat bonuses.

World of Warship’s Bayard is an entirely fictional warship. The design of Bayard is based on a ‘what-if’ scenario where Italy and France sign a treaty (“Rome Naval Treaty of 1931”) in 1931 agreeing to cease construction of 10,000-ton heavy cruisers in favor of smaller cruisers with guns of a 155mm caliber or less. In this scenario, with the launch of the Mogami-class light cruisers (fifteen 155mm guns) by Japan in 1934, the Marine Nationale felt obliged to respond in order to protect their holdings in Indochina. The design features a larger development of the most advanced light cruisers then built in France – the La Galissonnière-class. The design of the new cruiser was to expand the main battery with an extra turret for a total of twelve (4x3) 152mm guns, and featured a stronger secondary battery of four twin mounts featuring the 100mm/45 CAD Mle 1937. Due to a shift in focus towards the De Grasse-class, only one ship is laid down, but was not completed before the fall of France in 1940. Thus, the ship escaped to the United States, and was completed post-war with a new anti-aircraft armament and modern fire control equipment. The full article describing the design of the fictional warship can be found here, on World of Warships’s main website.

In reality, there was no ‘Rome Naval Treaty of 1931' – in fact, Italy and France had little in the way of negotiations on the subject of cruisers, rather focusing on the question of battleship construction, as both nations were allowed to build 70,000 tons of battleship earlier than other naval powers as per the terms of the Washington Naval Treaty. Historically, both parties ceased construction of the 10,000-ton heavy cruiser due to the London Naval Treaty of 1930. Although neither country had signed on to Part III of the treaty specifically limiting the construction of the type, there was an informal agreement between the two to stop building these expensive warships.

Historically, French cruiser construction past the six 7,600-ton La Galissonnière-class focused on getting as much as possible out of the extra 400 tons they could build on (as the London Naval Treaty limited light cruisers to 8,000 tons standard). This created the 8,000-ton De Grasse-class, which mainly focused on increasing anti-aircraft armament and armor protection over the 7,600-ton cruisers. Three ships were planned, but only one was laid down. The next cruisers France would look to build were the ‘C5’ type, which were a move back to 10,000-ton heavy cruisers in order to counter the German construction of their own heavy cruisers – the Admiral Hipper-class. Three were planned, to replace the Duguay-Trouin-class. Japan, too far away for France to deal with and a far less pressing threat than the Italian or German navies, never figured into French planning. The ‘C5’ series produced two designs – C5 A3, re-created in-game as the Charles Martel, and C5 SA1, which discarded the standard aviation suite in favor of increased anti-aircraft armament. Due to the outbreak of war with Germany over the invasion of Poland in 1939, work on ships not already laid down was suspended, and in this period the class was re-designed to be substantially larger – by 3,000 tons. This new version, known as the Saint Louis-class, would have been built under the same program as the two planned Alsace-class (N°1 type) battleships, a light cruiser, six contre-torpilleurs, sixteen destroyers, and six submarines.

Due to the fall of France, this program collapsed and ultimately none of the designs were ever raised again.

Immediately following the liberation of France, the Marine Nationale began planning its post-war posture, which required the construction of new warships. Ideally, France wished to have by 1960 twelve modern light cruisers – six conventional light cruisers armed with 152mm guns, and six anti-aircraft cruisers. In March 1945 the navy began exploring designs for a twelve-gun 152mm light cruiser, but this effort was ultimately ceased in January 1948, ending the history of French light cruiser development - the funding was simply not available. However, in 1949 France joined NATO, and thus began receiving financial assistance the Mutual Defense Assistance Program (MDAP), and from this the Marine Nationale was able to fund the conversion of the De Grasse, laid down but not completed prior to the Second World War, into an anti-aircraft cruiser (55% of the funding coming from MDAP), and based off of the conversion the purpose-built Colbert was also constructed. The two anti-aircraft cruisers, combined with the three surviving La Galissonnière-class light cruisers completed in 1937, was substantially less than the ambitious 6-6 cruiser fleet originally planned, but it was what post-war finances could afford (and most navies began moving away from gun-cruisers in this period anyways, with the Italian Marina Militare rebuilding the light cruiser Giuseppe Garibaldi into Europe’s first guided missile cruiser in 1957, only three years after Colbert was laid down).

Ships of France
Cruisers
Retrieved from "http://wiki.wargaming.net/en/index.php?title=Ship:Bayard&oldid=320763"
Categories:
Your location:
To log in, select the region where your account is registered
CIS Europe North America Asia
Or use Microsoft Login to enter WoT XBOX ecosystem
Log in