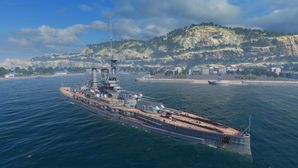 The warship belonged to the last series of battleships built for the Imperial German Navy. She was distinguished for her powerful 380 mm main guns with extremely good shell ballistics and a rate of fire that was quite high among similar gun systems.

The last Imperial German battleship, Bayern stands as the ultimate refinement of the dreadnought-type before the shift to the fast battleship. She represents the best of what the Kaiserliche Marine had ever wanted for their linienschiff dreadnoughts: tough-as-nails, good offensive power, and fast (for a dreadnought); she is very potent when compared to other battleships of her tier. Like the ships before her, Bayern is can do very well while brawling with other battleships, and can cause massive damage when positioned properly in a brawl.

It is important to know that the upgrade hull is fictional but it is worth upgrading because it gives better defense against planes as well as more healthpool. Many players may want keep her real life stock hull configuration but take the risk of weak AA defense and lower healthpool.Protecting Bayern is an armor belt significantly stronger than her American colleague New Mexico and much stronger than Fuso, though like all dreadnoughts the deck armor is somewhat questionable. Her offensive armament rivals that of Tier VI premium battleship Warspite in terms of gun caliber and ballistics. At a glance, Bayern may not look like much compared to her peers, but she is a solidly-rounded ship with many strengths and few weaknesses. NOTE: As of 0.10.3, the historical hull for Bayern has been removed.

Bayern has access to four Upgrade Slots as a Tier VI ship.

Bayern can equip the following consumables:

SMS Bayern was the lead ship of the Bayern-class of battleships in the German Kaiserliche Marine (Imperial Navy). The vessel was launched in February 1915 and entered service in July 1916, too late to take part in the Battle of Jutland. Her main armament consisted of eight 38 cm (15-inch) guns in four turrets, which was a significant improvement over the preceding König’s ten 30.5 cm (12-inch) guns. The ship was to have formed the nucleus for a fourth battle squadron in the High Seas Fleet, along with three of her sister ships. Of the other ships only one — SMS Baden — was completed; the other two were canceled later in the war when production requirements shifted to U-boat construction.

Bayern was commissioned midway through the war, and had a limited service career. The first operation in which the ship took part was an abortive fleet advance into the North Sea on 18–19 August 1916, a month after she had been commissioned. The ship also participated in Operation Albion in the Gulf of Riga, but shortly after the German attack began on 12 October 1917, Bayern was mined and had to be withdrawn for repairs. She was interned with the majority of the High Seas Fleet in Scapa Flow in November 1918 following the end of World War I. On 21 June 1919, Admiral Ludwig von Reuter ordered the fleet to be scuttled; Bayern sank at 14:30. In September 1934, the ship was raised, towed to Rosyth, and scrapped.

Ships of Germany
Battleships
Retrieved from "http://wiki.wargaming.net/en/index.php?title=Ship:Bayern&oldid=322913"
Categories:
Your location:
To log in, select the region where your account is registered
CIS Europe North America Asia
Or use Microsoft Login to enter WoT XBOX ecosystem
Log in