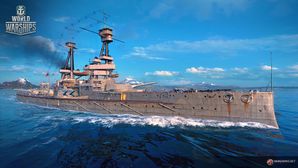 The Bellerophon-class battleships were developed from the renowned Dreadnought class. The ship inherited turbine propulsion and a main battery consisting of ten 305 mm guns from her predecessor, but, unlike the prototype, she had armored torpedo protection.

With her Propulsion upgrade, Bellerophon is the fastest battleship of her Tier III contemporaries. She also has decent rudder shift time and turning radius similar to Nassau’s, although slightly worse. Similar to König Albert and Kawachi, she has two wing turrets making it possible for her ever to have only 4 of her turrets bear on either side. Like most other battleships, her turret traverse is very slow, making the guns unable to keep track on a selected target when performing sharp turns.

Bellerophon has a decent array of secondary batteries which can be deadly to enemy ships that wander too close. Unlike Nassau or König Albert, her secondaries are 102mm in caliber (as compared to the Germans' 150mm) and fire high explosive shells rather than armor piercing ones. This can be useful in dealing the extra damage needed when engaging at short range.

Players that have played König Albert — or even Kaiser — will find Bellerophon to be comfortably familiar.

Quickly research Hull (B) for better rudder shift and the increase in total hit points, as her stock propulsion is enough to get around. Then research the Mk. III mod. 2 Fire Control System for better range, as it may prove useful when attempting to fight higher tier battleships with better range. Finally, research the Propulsion module upgrade to unlock the ability to outrun her Tier III battleship contemporaries.

The recommended upgrades for Bellerophon are as follows:

As a battleship, Bellerophon does not really need to worry much about its modules being incapacitated, but rather being set on fire and surviving enemy salvos for a considerable amount of time. Therefore, survivability skills are recommended. Concealment Expert may help in providing a surprise upon unsuspecting enemy cruisers or battleships. And Grease the Gears is a must-have for this ship, as she has very poor turret traverse.

Bellerophon can equip the following consumables:

Again, due to her low-tier nature, it is not necessary to mount flags on Bellerophon. Should the player insist on mounting flags, the following recommendations are available. 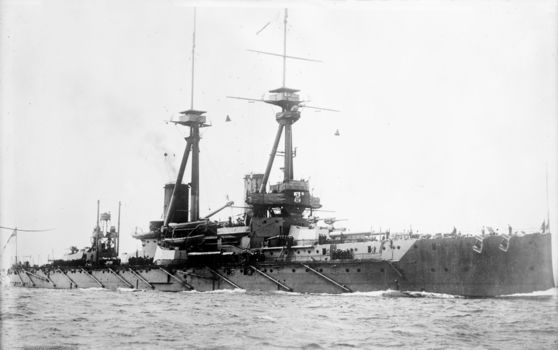 Born from the creation and principles used to build HMS Dreadnought, HMS Bellerophon and her sister ships — Temeraire and Superb — became the basis for the conventional form of capital battleships at the time. With the advent of Dreadnought rendering previous battleships obsolescent at a stroke, the Royal Navy quickly sought to keep the numerical advantage of battleships, as they had done previously with "pre-dreadnought" battleships. Therefore, four battleships were planned for the 1906/7 construction program, although one of these was subsequently cut by the British government at the time.

Therefore, the Bellerophon-class used the same successful turbines and machinery of Dreadnought to drive the ship at 21 knots, and the same ten 12-inch (305mm)/50 caliber BL Mk.X guns, in the same 'A', 'P', 'Q', 'X', 'Y' arrangement. Although the ships were very similar to Dreadnought, they incorporated some modifications of her design.

For strarters, they were improved with two large tripod masts in better locations: one in front of each funnel, instead of Dreadnought’s tripod mast and pole masts aft of the funnels. Bellerophon initially also had sixteen (16) 4-inch (101.6mm) guns which posed a more credible threat to torpedo boats than the twenty-seven (27) 3-inch (76.2mm) guns fitted to Dreadnought. These guns were fitted in pairs on 'A', 'P', 'Q' and 'Y' turrets, and 4 per side in the superstructure. The torpedo bulkheads were also extended to cover the machinery spaces between the magazines, unlike with Dreadnought. This overall improved the survivability of the ship, despite the belt armor of Bellerophon being an inch thinner than her predecessors, down to 10 inches (254mm) at its maximum thickness. To make up for the ships' larger size and displacement, the hull form was refined to allow Bellerophon to keep the top speed of 21 knots achieved by Dreadnought, which was also helped by weight savings achieved by reductions in the capacity of fuel carried. Bellerophon also only carried 3 torpedo tubes and 18 torpedoes, as opposed to 5 and 27 on Dreadnought.

In May 1910, an experimental fire-control system was mounted on the main mast, which provided electrical data to the turrets below. It was subsequently removed and replaced by production models in 1915 and 1916 for all three ships. Modifications also included moving the 4-inch guns from the turret roofs to the superstructure, although this reduced the overall count of guns by two to fourteen. The guns mounted just aft of 'P' and 'Q' turrets were removed from the superstructure later on during World War I. Two (2) 3-inch (76.2mm) anti-aircraft guns were added during the war, one later being replaced by a 4-inch (101.6mm) model. Flying off platforms for aircraft on top of 'A' and 'Y' turrets were fitted in 1918.

Bellerophon was laid down in December 1906, with Temeraire and Superb following in 1907. All three were launched during that year, and completed in 1909.

HMS Bellerophon was the lead ship of the class, and upon completion assigned to the Home Fleet's First Division. In 1911, she was present at the coronation review of King George V, although she had sustained minor damage the previous month in a collision with HMSInflexible. In late 1913, she was present with the Mediterranean fleet and visited Greece. At the outbreak of the First world war, Bellerophon was due for a refit in Gibraltar, but was sent back to Britain to form part of the Grand Fleet. At this time, she was part of the 4th Battle Squadron. 1914 and 1915 consisted of sweeps, patrols and Grand fleet exercises, but in 1916, Bellerophon was present for the Battle of Jutland. She was the 14th battleship in the Grand Fleets line of battleships, and during the battle, fired upon the German ships including destroyers, the light cruiser SMS Wiesbaden and the battlecruiser SMS Derfflinger. Bellerophon at least hit the Derfflinger with one shell, and returned from the battle undamaged. Bellerophon also took part in the inconclusive Action of 19 August, but afterwards, her service generally consisted of routine patrols and training in the North Sea as before. As the second dreadnought battleship in service, the ship was deemed obsolete after the war and was used as a training ship in 1919 before she was placed in reserve. Bellerophon was sold for scrap in 1921 and broken up beginning the following year.

HMS Temeraire was the last of the three ships commissioned, although second laid down and launched. Also present at the fleet reviews in 1909 and 1911, Temeraire spent her pre-war service in the home fleet, visiting Cherbourg in 1913. Transferred to the 4th Battle Squadron to join Bellerophon at the outbreak of war, her wartime career imitated that of her older sister. At the Battle of Jutland, Temeraire was the 15th ship in line, immediately behind Bellerophon. Firing at the same targets, she failed to hit Derfflinger, but did claim 2 or 3 hits on Wiesbaden. In 1918, she was joined the Mediterranean fleet, and was present in Constantinople for the armistice between the Ottoman Empire and the Allies. Temeraire also provided a crew for the Derzki-class destroyer Schastlivy after the Germans handed the ex-Russian ship over at the armistice. In 1919, she returned to Britain, and although initially placed in reserve, was then used as a training ship and once more arrived in the Mediterranean on a training cruise. By 1921, her services in this role were over, and she was subsequently sold for scrap, being broken up in 1922.

HMS Superb was the seventh ship of the name in the Royal Navy, and her career followed the same lines as those of her sisters. She served with the First Division (later 1st Battle Squadron), was in attendance at fleet reviews, and visited the Mediterranean and Cherbourg, France. Although initially assigned to the 1st Battle Squadron, she was transferred to the 4th Battle Squadron in late 1915, joining her sisters. After numerous sweeps, training exercises, and sorties in the North Sea, by the time of the Battle of Jutland, Superb was the flagship of the Third Division, 4th Battle Squadron (as the regular flagship, Iron Duke-class Emperor of India was under refit). During the battle, she was the 11th ship in the Grand Fleets battle line after deployment, and — like Temeraire — claimed hits on the crippled light cruiser Wiesbaden. Refitting throughout the early stages of 1918, she was transferred to the Mediterranean fleet as the flagship, and lead the fleet to Constantinople for the armistice with the Ottoman Empire. She provided a crew for the Russian destroyer Derzki, and visited Egypt and the Black Sea during 1918 and 1919. In September, she briefly replaced Bellerophon as a training ship, before being reduced to reserve in December, and used for gunnery experiments in 1922. She followed her sisters to the scrapyard in 1923.

Ships of U.K.
Battleships
Retrieved from "http://wiki.wargaming.net/en/index.php?title=Ship:Bellerophon&oldid=319624"
Categories:
Your location:
To log in, select the region where your account is registered
CIS Europe North America Asia
Or use Microsoft Login to enter WoT XBOX ecosystem
Log in