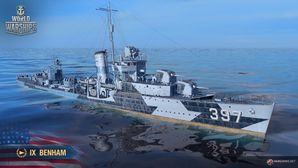 The lead ship of a series of destroyers whose main armament comprised four quadruple torpedo tubes placed along the both sides of the ship, in addition to dual-purpose 127 mm guns.

The USS Benham is a great torpedo boat that lives up to its historical purpose. It was built so the US navy could procure enough torpedo salvos as most of their dds had more guns and fewer torps. In game you can get the torpedo reload down to 65 seconds, firing up to 16 torpedoes. As it has fewer guns and low health pool, it is recommended to use it as a torpedo-ship than a gunboat.

As a premium ship, Benham doesn't have any upgrades to research.

The recommended upgrades for Benham are focused on enhancing the torpedo armament:

Benham can equip the following consumables:

As a premium ship, Benham comes included with Type 10 camouflage that lowers her detection radius, reduces the accuracy of incoming shells, reduces her repair costs, and increases the amount of experience she earns. As well as her standard, she also has an exclusive, "The Master of the Water World" camouflage from the Rogue Wave event offering the same bonuses as the standard.

USS Benham (DD-397) was the lead ship of her class of destroyers and the second ship of the United States Navy to be named for Andrew Ellicot Kennedy Benham. It missed the attack on Pearl Harbor, being an escort for the USS Enterprise on its way to Midway at the time. It also served off Hawaii during the Doolittle raid, rescued survivors from several ships, and operated during the Battle of Midway and the landings on Guadalcanal, among other missions. She was torpedoed and nearly destroyed by the IJN near the end of 1942, which resulted in her scuttling by a friendly destroyer in order to prevent her capture.

The Benham-class of destroyers was the last class of destroyers in the United States Navy that was equipped with 16 torpedo tubes. They were improved in several ways over the preceding classes, but also somewhat heavier passing the 1,500 ton mark by more than 10% when carrying their standard load.

Compared to the earlier Bagley-class they had one less boiler, which resulted in a noticeably smaller funnel. Otherwise their propulsion was not all too different, the three aforementioned boilers would generate steam for two sets of turbines, which would give the ship a designed horsepower of 50,000 for a speed of 38.5kn. The cruising range was 6,500 nautical miles at a speed of 12 knots.

The main armament consisted of four 127mm/38 dual purpose guns mounted in four single mounts. A new feature of the 16-torpedo destroyers was that the guns were no longer in pedestal mounts, but instead utilized base-ring mounts, which included an ammunition hoist for a faster and more convenient ammunition supply to the main armament. This kind of mount would become the standard of all the subsequent destroyers fielded by the USN during WW2.

Most prominent on the Benham-class were the four quad torpedo launchers. It was intended that these would permit the ship to fire a full 16 torpedo barrage against a target using gyros to steer the torpedoes into the desired direction. No reloads were fitted on these ships for the torpedo launchers. A downside of this armament was that the ships were overloaded and dangerously topheavy. As such, it was decided during World War Two to remove at least one pair of torpedo launchers.

The auxiliary armament initially consisted of four .50 cal machine guns. This was deemed inefficient and over the course of World War Two measures were taken to strengthen AA defenses. Depending on how many torpedo launchers were removed, up to two or four twin mounts of the 40mm Bofors were mounted as well as a handful of 20mm Oerlikons, with the .50 cal machine guns being removed due to their limited effectiveness. The initial ASW-equipment consisted of a sonar and ten depth charges in two racks. Latter was supplemented by four depth charge throwers and an increase in the total depth charge count to 46 in 1941-1942.

The hull of U.S.S. Benham (DD-367) was laid down on 1 September 1936 at the Federal Yard at Kearny, New Jersey, and launched on 16 April 1938. After completion she was commissioned into the United States navy on 2 February 1939 and was almost immediately assigned to the Atlantic Fleet. Most of her pre-war career was spent operating as part of the Neutrality Patrol. Known as ‘Patrol Zero’, the other members of DesDiv 18 (Destroyer Division 18) consisted of her sister Ellet and two Somers-class destroyers, Davis and Jouett. DesDiv 18’s patrol zone stretched from Newfoundland in the north to the 40th parallel in the south, and little of note happened during this period. She was later shifted to operations in the Gulf of Mexico, and in mid-1940 was reassigned to the Pacific, reaching Pearl Harbor on 14 April 1940.

Various operations kept her between the American west coast and the Hawaiian Islands, and eventually Benham found herself assigned to the escort force for the carrier Enterprise. On 28 November 1941 the carrier and her escorts, Benham among them, set sail for Wake Island, in order to reinforce its defenses via the delivery of Marine Fighter Squadron 211 (VMF-211). On 7 December 1941, Enterprise’s Task Force was on its way back to Pearl Harbor when six Japanese aircraft carriers launched the infamous raid, and America was finally at war. Benham continued to accompany Enterprise, screening her as she covered convoys to Samoa, and launched raids against the Marshall Islands. She also participated in the Doolittle Raids, and later on the Battle of Midway, still as an escort of Task Force 16 (part of DesRon 6, or Destroyer Squadron 6). She took part in anti-aircraft actions and later, when the carrier was fatally damaged, rescued 720 survivors of the carrier Yorktown.

When the Guadalcanal campaign started, she continued her role and participated in another carrier action, the Battle of the Eastern Solomons. However, during the battle Enterprise suffered considerable damage and had to be sent back to the United States for repairs. Due to the desperate need of the surface forces around Guadalcanal for more destroyers, Benham was detached from Enterprise’s escort and joined Task Force 64 as an escort to the battleships Washington and South Dakota, which was under the command of Rear Admiral Willis “Ching” Lee. On the Night of 14-15 November 1942, Lee lead his force into the bloodied waters around Savo Island. His four destroyers – Benham along with Walke, Preston, and Gwin were positioned 5,000 yards ahead of Washington, and South Dakota trailed the other battleship by 1,500 yards. Opposing them was the Japanese bombardment force, consisting of the battlecruiser Kirishima, heavy cruisers Takao and Atago, with two light cruisers and nine destroyers acting as the screening element.

At 23.13, lookouts on destroyer Shikinami spotted unidentified shapes moving into Savo Sound on a similar course – Task Force 64. At 00.01, Washington’s radar picked up the light cruiser Sendai at 18,000 yards. At 00.12, the ship was spotted visually, and upon confirming the identify of the enemy ships at 00.14, Lee gave his battleships permission to engage. At 00.17, the relative silence of the night was terminated with an enormous sound as Washington unleashed the first salvo fired by an American battleship in the Pacific theater. Seconds later South Dakota joined in, and the battleships sent a volley of 16” Mk.8 SHS shells shrieking towards the Japanese ships. The 5” secondary battery also joined in. The first salvos fell in the wake of the Japanese ships, the next fell directly in their path. Deciding that challenging 16” guns was a bit too much, they came about and made smoke, and escaped the bombardment with no damage. Washington ceased fire at about 00.20 after expending 42 16” and 100 5” shells, while South Dakota went silent after eight salvos. South Dakota believed she had sunk a ship, and Washington thought she had heavily damaged her opponent – but neither was true. Even as guns went silent, destroyer Walke picked up another radar contact – the destroyer Ayanami, rushing the Americans alone to make a torpedo attack. Walke engaged her at 15,000 yards, and shortly after Benham joined in with the first salvos of her first surface action. Washington’s secondary guns came back to life and added their fury to the action, loosing 133 5” shells. Then, at 00.27 the light cruiser Naka rounded Savo island with a group of destroyers. Benham appears to have maintained her fire on Ayanami, but the other three destroyers switched fire to the newcomers. The range was a mere 9,000 yards, but even as the American destroyers started began churning up the water around the Japanese ships, they started to be punished in return. Naka pounded Preston with numerous 140mm hits, and Japanese destroyers also contributed their fire, shredding the ship and setting her ablaze. At 00.32, her torpedoes cooked off, devastating the ship with a large explosion, and she began to sink. Gwin took several hits as she swerved to avoid the sinking Preston, while South Dakota started shelling Sendai again. She ceased fire after five salvos, but then disaster struck as a short circuit cut all power in the battleship, rendering her “blind, deaf, and dumb”. Gwin and Benham continued to engages flashes to their starboard as the battleships went silent.

At 00.37, however, a threat the Americans hadn’t seen made itself known. A massive blast rocked Benham as a Type 93 ‘Long Lance’ torpedo impacted her bow and literally blew it away. The unfortunate destroyer heeled hard to port and then rocked back into a 30o list to starboard. Her speed crashed from 27 down to 5 knots, and around the same time Preston’s wreck took a hit, while Walke ate several 140mm shells and a torpedo hit of her own, blasting the ship in half and causing her to sink almost immediately. Benham, miraculously, was still afloat, and Lee ordered her and Gwin, his last remaining destroyer, to retire from the action. Although the rest of the Second Naval Battle of Guadalcanal would go down in history, Benham’s role in the action was over. Her crew’s only opponent was the waters trying to drag their ship to the bottom, and the Japanese were a secondary concern at best. The struggle continued for fifteen hours, when it became clear the ship could not be saved, and the crew abandoned ship. Gwin rescued the survivors, and fired four torpedoes at point-blank range in an attempt to the scuttle the ship, but three missed outright while the fourth simply blew up before it reached the stricken destroyer. Gwin then switched to he guns, and after a hail of gunfire, Benham finally sank at 19.38, 15 November 1942.

Ships of U.S.A.
Destroyers
Retrieved from "http://wiki.wargaming.net/en/index.php?title=Ship:Benham&oldid=316612"
Categories:
Your location:
To log in, select the region where your account is registered
CIS Europe North America Asia
Or use Microsoft Login to enter WoT XBOX ecosystem
Log in