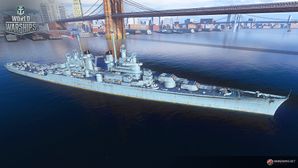 This heavy cruiser design appeared soon after the completion of development of cruiser Baltimore and was her direct successor (Project CA-B). The increased water displacement allowed engineers to significantly reinforce the ship's armor protection and armament. The number of main guns was augmented to total 12 overall.

Buffalo is, by and large, a direct upgrade from Baltimore before her. Carrying twelve 8" rifles in four triple turrets, two fore and two aft, 47,800 hitpoints, decent armor, excellent gun handling, and powerful AA, Buffalo has the makings of a truly powerful heavy cruiser. As a high tier American cruiser, Buffalo has three consumable slots beyond Damage Control Party

- A choice between Defensive AA Fire

, A choice between Spotting Aircraft

. Thanks to her high health, Buffalo enjoys one of the most potent Repair Party

heals for cruisers of her tier. Buffalo has the tools to face any opponent, with her famed American anti-aircraft power capable of fending off planes, Radar for hunting down destroyers, American super-heavy AP shells that can make a mess of cruisers, and a heavy HE broadside coupled with her accuracy makes scoring nearly-full salvos on battleships easy.

Against other cruisers of her tier, however, Buffalo is sorely lacking torpedoes. While she can fend off most other cruisers, she lacks the alpha-strike potential that comes from torpedoes to allow her to deal with battleships quickly, against which she can find herself outmatched in a prolonged brawl. Buffalo fights best against enemy battleships at medium to long range, using islands as cover, as she is a large target. The other issue with Buffalo is her limited range, at only 15.6km, the shortest range of all current Tier IX cruisers. This can be mitigated, but it requires sacrificing either Radar for the Spotting Aircraft, or equipping Gun Fire Control System Mod 2 in her 6th Upgrade slot.

Availability of researchable upgrades for Buffalo is as follows:

The recommended upgrades for Buffalo are as follows:

Buffalo can equip the following consumables:

Players who wish to spend doubloons can equip Buffalo with Type 19 camouflage that lowers her detection radius, reduces the accuracy of incoming shells, reduces her repair costs, and increases the amount of experience she earns.

Buffalo corresponds with the Bureau of Ships design study CA-B, submitted to the General Board on 18 September 1940.

Ships of U.S.A.
Cruisers
Retrieved from "http://wiki.wargaming.net/en/index.php?title=Ship:Buffalo&oldid=317668"
Categories:
Your location:
To log in, select the region where your account is registered
CIS Europe North America Asia
Or use Microsoft Login to enter WoT XBOX ecosystem
Log in