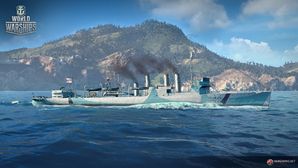 The warship belonged to a series of U.S.-built "flush-deckers". In 1940, she was transferred to the U.K. Along with her extremely powerful torpedo armament, Campbeltown was also noted for uncommonly high speed for that era. The distinctive placement of her torpedo tubes allowed her to quickly concentrate torpedo fire on either side.

As a premium ship, Campbeltown doesn't have any upgrades to research.

The recommended upgrades for Campbeltown are as follows:

Unlike tech-tree Royal Navy destroyers, this is the standard Smoke Generator.

As a premium ship, Campbeltown comes with Default permanent camouflage and a set of permanent combat bonuses.

The HMS Campbeltown was a Town-class destroyer of the Royal Navy that was famous for her role in the St. Nazaire Raid in 1942. Originally the Wickes-class destroyer USS Buchanan (DD-131), she was given to the Royal Navy in 1940 as a part of the Destroyers for Bases Agreement. After being refitted, she served as an escort for British convoys between Britain and West Africa before being chosen for Operation Chariot. In preparation for the raid, she had her 3rd and 4th funnels removed to mimic a German torpedo boat, she received extra bridge armor and she was filled with high explosives to be used as a ram to disable the Louis Joubert drydock; the only German-occupied dock on the Atlantic coast large enough to hold the battleship Tirpitz. The raid was an absolute success when the explosives detonated successfully and put the docks out of commission for the rest of the war.

Ships of U.K.
Destroyers
Retrieved from "http://wiki.wargaming.net/en/index.php?title=Ship:Campbeltown&oldid=321556"
Categories:
Your location:
To log in, select the region where your account is registered
CIS Europe North America Asia
Or use Microsoft Login to enter WoT XBOX ecosystem
Log in