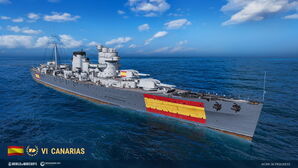 A heavy cruiser with an unconventional silhouette. The ship was similar to the County-class ships of Great Britain by adopting, among other features, "box" protection for her magazines.

Canarias was first available during the Gibraltar Pillars event during Update 0.11.1. on 16th Feb 2022.

With the large, iconic, and frankly tacky Spanish flags along her hull, Canarias is the first Spanish ship to enter the game and is perhaps one of the most unique Heavy Cruisers at her tier. To begin, compared to her older counterparts Canarias only has access to Armor Piercing ammunition on her eight 203mm guns, unlike other cruisers which have access to both High Explosive and Armor Piercing ammunition, or in the case of the Italian Trento, Semi-Armor Piercing shells. She compensates for this by having improved characteristics on these shells, with an improved fuse timer and auto bounce angles reminiscent of Royal Navy Light Cruisers, which allows her to deal consistent damage against thinly armored targets such as Destroyers and score consistent citadel hits on cruisers with exposed citadel plating, though her guns are easily defeated by ships with spaced armor belts.

The uniqueness doesn't stop there. Canarias is also equipped with a French Engine Boost Consumable, which grants a 15 percent speed increase for a duration of 180 seconds, or up to 234 seconds with the appropriate module slotted. This, along with the Sierra Mike Signal Flag, gives Canarias the ability to push her top speed from 33 knots to 39.4 knots, which is the highest top speed of any of the Tier VI Cruisers and also grants her a unique level of flexibility in being able to reposition quickly to deal with threats.

Speaking of threats, however, this is where the shortcomings begin. Canarias, unfortunately, doesn't get any improved armor plating similar to Pensacola, or even a heal similar to Devonshire, who she more or less shares an armor scheme with, which renders her somewhat fragile against Battleship-caliber weaponry, though she does have a nice big slug of health at 35,100 hitpoints. In addition, while she does come armed with 8-inch ( 203mm ) guns, her AP alpha is actually very low, at just 3800 versus 4400-4600 for most cruisers at this tier, and while the improved fuse and angles mean that you will land consistent damaging salvoes, they won't really hurt that much against anything larger than a Cruiser, even with her fairly quick 12 seconds reload time and fairly good 16.15km maximum range.

From an overall perspective, while Canarias does bring something fresh and unique to the table as far as Tier VI Cruiser gameplay goes, as well as being another unique historical premium ship, as far as her capacity goes her game impact and damage dealing ability is largely limited to dealing with Destroyers and Light Cruisers. She lacks High Explosive Shells to set consistent fires and her chip damage versus battleships stacks up slowly against the more armored targets you will see at Tier VI or even higher tiers. So while a good ship, she's not exactly spectacular, but definitely makes up for it by being quite fresh and unique.

As a premium ship, Canarias has no module upgrades to research.

As a premium ship, Canarias comes with Default permanent camouflage and a set of permanent combat bonuses.

Canarias and Baleares found their origin under Ley de 13 de julio de 1926 focussed on Spanish naval rearmament, three Canarias-class cruisers were planned: Canarias, Baleares, and Ferrol which was never laid down due to lack of funding. Following the Washington Naval Treaty limitations, the Canarias-class couldn't carry any armament greater than 203mm and larger displacement than 10,000 tons. Her design was based on the Royal Navy's Vickers-Armstrong–designed County-class heavy cruisers.

British engineer Philip Watt (Armstrong shipyard manager) was appointed as a chief design officer. Plans were accepted by Sociedad Española de Construcción Naval on May 31, 1928. Canarias was laid down on August 15, 1928, and it was to be delivered in 1933 but this wasn't possible until 1936.

Canarias was unfinished at the outbreak of the Spanish Civil War but the Nationalist side decided they wanted her to join active service as soon as possible so a lot of effort was put into the final building stages. When she joined Nationalist Navy the ship lacked main artillery firing direction and secondary armament. It was even necessary to transfer crew from other ships to form the crew of the Canarias.

Canarias and her unfinished sister ship Baleares fought in the Spanish Civil War for the Nationalists. She saw action in the following battles: Batalla del Cabo Espartel, Batalla del Cabo Machichaco, Battle of Malaga (where she took part in the war crimes known as Malaga-Almeria road massacre), bombing of Alicante, bombing of Barcelona and the important battle of Cabo de Palos where her sister Baleares was sunk by torpedos from Republican Navy destroyer Lepanto. During the war she sank 34 ships.

During the Second World War, she unsuccessfully searched for survivors of the German battleship Bismarck. In 1943, she received a small refit, adding German 37mm anti-aircraft cannons.

Coversion plans into an aircraft carrier

In 1946, the Spanish Government started developing plans for conversion into a 12,000 ton light aircraft carrier. Spain was under an international aislament and building his own carrier was the only possibility left. The design consisted in maintaining the ship’s hull and engine and transforming the rest of the ship. But in 1951 the plan was halted and later in 1953 with the approval of the purchase of ships from the USN it was totally abandoned.

In 1969, Canarias took part in the Equatorial Guinea Independence Crisis under the name of Operación Ecuador due to the collapse of the Spanish colonial administration. Following the United Nations directives for the decolonization in Africa, a referendum was held. 64,32% of the population voted for independence so a recall was needed for all Spanish personnel whether civilian or military. During the operation, Canarias carried back to Spain a total of 280 men, 230 vehicles, two planes, and one helicopter.

She was finally decommissioned in 1975, making her the last heavy cruiser in active service and the last surviving Washington Naval Treaty cruiser. Several attempts at conversion into a museum ship failed due to a lack of funds. The ship was finally scrapped in 1977. She was also the last cruiser survivor from the Washington Treaties era.

Ships of Spain
Cruisers
Retrieved from "http://wiki.wargaming.net/en/index.php?title=Ship:Canarias&oldid=319485"
Categories:
Your location:
To log in, select the region where your account is registered
CIS Europe North America Asia
Or use Microsoft Login to enter WoT XBOX ecosystem
Log in